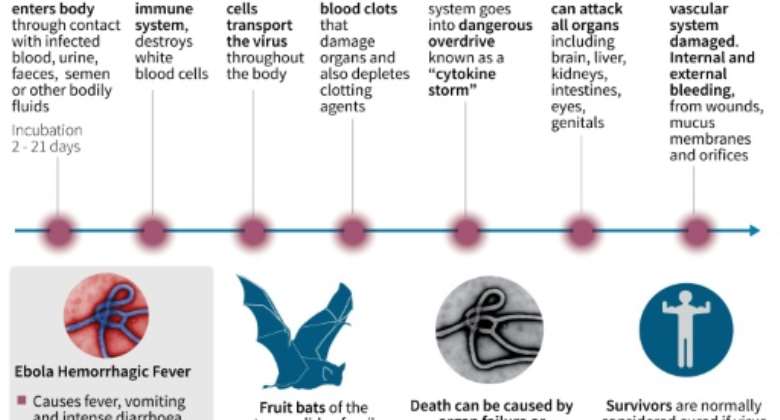 How the Ebola virus attacks. By (AFP)

A leading Ivory Coast infectious diseases expert on Thursday stood by a diagnosis of Ebola in a visiting Guinean woman, brushing off a request for reconfirmation by her country's government.

"I do not question my analysis," said Serge Eholie, head of the infectious and tropical diseases department of the Abidjan hospital where the patient was admitted.

"I am an infectious diseases expert and clinician, there's no mistake about the clinical presentation," Eholie told AFP.

The 18-year-old had travelled to Abidjan by bus from Labe in northern Guinea, a journey of some 1,500 kilometres (950 miles) that traverses a densely-forested region where Ebola epidemics broke out earlier this year and 2013-16.

Ebola, which is transmitted through close contact with bodily fluids, causes severe fever and, in the worst cases, unstoppable bleeding.

Guinean authorities had earlier Thursday asked for a review of the initial diagnosis in the case, the first in Ivory Coast since 1994.

"The improvement in symptoms... in 48 hours raises questions, given the typical course of the disease," Guinean Health Minister Remy Lamah wrote in a letter to the World Health Organization (WHO) seen by AFP.

The minister also said that a Guinean medical team sent to Abidjan could not gain access to the patient.

Eholie, who is also the Ivorian health ministry's spokesman, said the young woman had shown "all the symptoms" of Ebola including fever, diarrhoea, vomiting and fatigue, while stressing that the disease "takes several forms".

Responding to Lamah's request of "reconfirmation" of her infection by the Pasteur Institute in the Senegalese capital Dakar, which is a reference lab for West Africa, Eholie said Abidjan's Pasteur Institute was also accredited by the WHO.

Also Thursday, the WHO said 49 individuals have been identified who were in contact with the Guinean woman.

An Ivorian doctor told a WHO-Africa online press conference that 70 people were aboard the bus, of whom 33 arrived in Abidjan, while the others are scattered across Ivory Coast.

The bus made stops in the western towns of Duekoue and Guezabo and in the administrative capital Yamoussoukro, he said.

"Through networking, we were able to home in on the communities" where the fellow passengers live, Health Minister Pierre Demba added.

"We are stressing the need for vigilance" by all health structures to spot any further cases, he said.

Factfile on how the Ebola virus attacks. By (AFP)

A senior health official in Labe, Elhadj Mamadou Houdy Bah, on Wednesday had said 58 contact cases had been identified there, and none had any sign of the disease.

Matshidiso Moeti, the director of WHO-Africa, praised the two countries' "remarkable solidarity" over the Ebola situation and the swiftness of the Ivorian response.

Guinea, with aid from the WHO, sent 5,000 doses of the Ebola vaccine to Ivory Coast two days after the young woman's infection emerged.

Vaccinations began in the country on Monday.

A four-month outbreak in Guinea claimed 12 lives this year before being declared over on June 19.