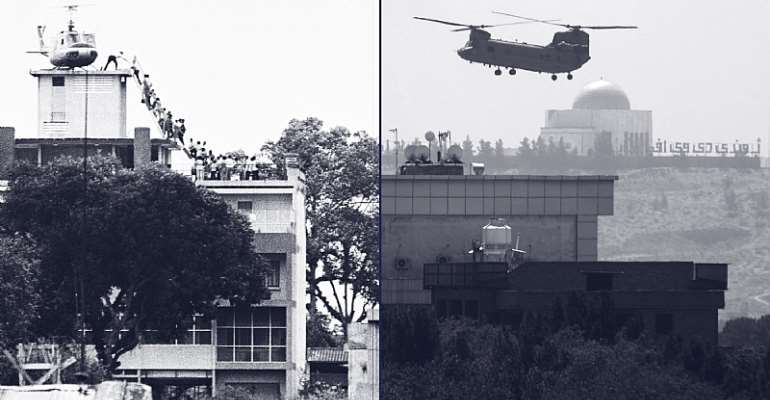 I consider Mao Zedong as one of the most brilliant revolutionaries of all ages. His “Red Book” was one of my Bibles during my formative years. I lapped his quotations up greedily.

One of the most renowned of Mao’s quotes was the maxim: “All Political Power comes from the barrel of a gun.”

Whichever we diced it, this is one eternal truth.

Another one: Atomic weapon is a paper tiger. The truism of this saying was brought starkly home as the imperialists’ project in Afghanistan unravel at dizzying pace.

That Afghanistan is nowhere near the Atlantic Ocean did not dissuade the blood-thirsty Americans from dragging their lackeys in North Atlantic Treaty Organization (NATO) from sending troops into the country in clear violation of international laws, and absolutely no regard to the lessons of history.

Twenty years and some estimated $1-3 Trillion later (depending on who is counting the beans), the over-armed invaders have been forced to withdraw in ignominy by AK-47 wielding peasants in flowing robes.

In the last week alone, the Talibans have captured nine provincial capitals, including Herat and Khandar(3rd and 2nd largest cities respectively). American intelligence (an oxymoron, if you asked me) just released an estimate that Kabul will fall within a month. They and their British cousins promptly announced the total evacuation of their citizens from the country.

I will wager on betting that Kabul will fall in weeks, if not days.

Having captured almost all the countrysides, the Taliban began their blitzkrieg on provincial capitals about a week ago. I listened to the BBC crowing about Americans deploying their Strategic B-52 Bombers to support the puppets they installed in Kabul. BBC called “experts” who opined that the costly bombers will stop the Taliban advances.

They were wrong, dead wrong.

It beggars belief that people in the West, including the so-called experts, intellectuals and think-thanks continue to get everything so spectacularly wrong. How could one arrogant people, who believe that they alone posses superior intelligence, continue make the same mistakes over and over?

The simple reason why vastly superior French and American weaponry did not prevail in Vietnam is exactly why vaunted American B-52s cannot change the course of events in Afghanistan.

And the reason is that imperialists, with their mindsets of: why pay for it when you can kill for it, are fighting unjust wars.

Against a determined foe, imperialists will continue to lose despite the fanciful and over-hyped military hardware they displayed to intimidate the faint-hearted.

As I was putting finishing touches to this peace, the report came that the Americans have sent troops to speed up the evacuation of their Embassy in Kabul, and that offer loan to citizens too indigent to buy plane tickets home.

What a complete rout! What a debacle!