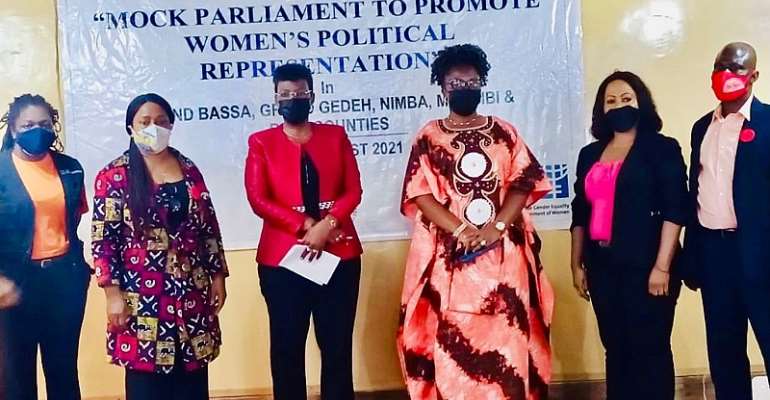 Gender, Children and Social Protection Ministry with support from UN Women has ended a two-day each mock Parliament session in Margibi and Grand Bassa Counties.

The Mock Parliament is aimed at promoting and strengthening collaboration mechanisms and advocating for an increase in women’s political participation through the inclusion of the enforceable 30 percent gender quota provision in the Liberia election law.

Speaking during the opening sessions in Grand Bassa and Margibi Counties, which was held from August 12-13; 16-17, 2021 respectively - Gender, Children and Social Protection Minister Williametta E. Saydee-Tarr told participants that Liberian women continue to be underrepresented in politics, as the participation of women in leadership and decision-making has remained on an all-time low, globally.

In addressing the underrepresentation of women in politics, the Gender Boss stated that Liberia has committed to take action to increase women’s political participation and representation by signing and ratifying a number of international and regional human rights instruments, including the UN Convention on the Elimination of All Forms of Discrimination Against women (CEDAW); the International Convention on Civil and Political Rights (ICCPR); the African Charter on Human and Peoples Rights (ACHPR); the Protocol to the Africa Charter on Human and Peoples Rights on the Rights of Women in Africa (ACHPR-PW); the African Charter on Democracy, Elections and Governance (ACDEG); the ECOWAS Protocol on Democracy and Good Governance (PDGG), among others.

"Currently, the legal framework governing elections, including laws on elections and on political parties, the independent electoral commission statutes and laws are still not gender sensitive. Still, efforts to amend the elections law have not yet been successful despite five (5) attempts since 2005. The latest attempt is through the Electoral Law Reform that is ongoing. In 2014, the Legislature amended Section 4.5 of the New Elections Law (NEL) stipulating that:

According to the Gender Minister, the phrase “should endeavor to ensure” has proven ambiguous and open to numerous interpretations as to whether Section 4.5 requires political parties to present a candidate list that has no less than 30 percent women or requires them to earnestly attempt to do so.

The Gender Minister told stakeholders to increase advocacy on the gender quota and other law reforms for women.

"I am optimistic that at the end of the ongoing nationwide Mock Parliament sessions, you will have some level of greater opportunity to seize the momentum being generated to accelerate constructive engagements with the Legislative Branch of government including strategic gender and judiciary committees in both Houses", the Minister noted.

According to Madam Nizigama, an increase in women in leadership will help build a safer, inclusive and more stable society.

For her part, Hon Ellen Attoh Wreh, Margibi County Representative of Electoral District #3 lauded the Ministry of Gender, Children and Social Protection and UN Women for organizing what she termed as enlightening initiative. Hon Wreh pleaded with participants to utilize knowledge gained from the mock sessions for the advancement of a gender balanced society.