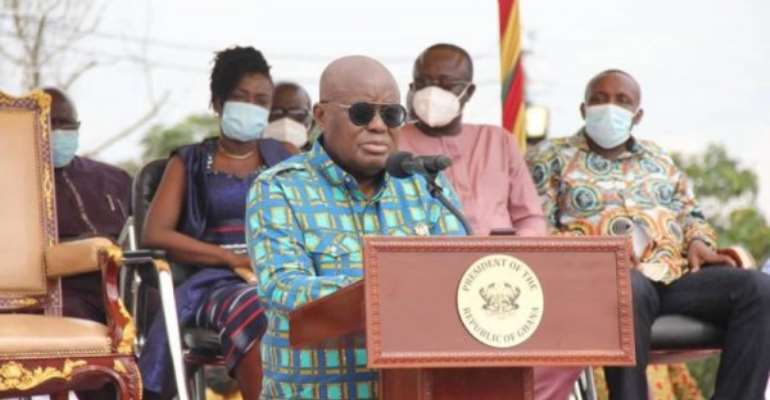 President Nana Akufo-Addo, has eulogised Prof. Albert Adu-Boahen at a ceremony to name a public square after him at Juaben in the Juaben Municipality of the Ashanti Region.

He described the late Professor, who was the first flag bearer of the New Patriotic Party (NPP), as fearless for standing his ground in the face of incessant political persecution.

"I have never met a man so fearless like Prof. Adu Boahen. I remember when the late Acheampong sent soldiers after us and everyone was insisting, we ran to Kumasi, Prof. Adu-Boahen stood up to the soldiers," he recounted.

He said Prof. Adu-Boahen bravely led the NPP to the 1992 elections at a time when President Jerry John Rawlings wielded so much power and remained a pillar behind the NPP until his demise.

The fight against the culture of silence during the Rawlings regime, according to President Akufo-Addo, was started by Prof. Adu-Boahen and praised him for his role in the current democratic dispensation that Ghanaians now enjoy.

President Akufo-Addo acknowledged the impact that Prof. Adu-Boahen had on him when he served as the campaign manager of the late Professor during the 1992 general elections.

He said Prof. Adu-Boahen's selflessness and passion for national development shaped his political career, saying that the late Professor would be proud of him as the President of the country.

"I wish to express my sincere gratitude to Prof. Adu-Boahen for his wise counsel and guidance which has brought me this far," he observed.

He commended Daasebre Otuo Serebour and the Juaben Traditional Council for honouring a great man who spent most of his life fighting for rule of law and democratic governance.

He said the late Professor was a statesman worth celebrating, having left indelible achievements in the areas of democratic governance, education, free speech, African history and the general political landscape, especially the Fourth Republic.