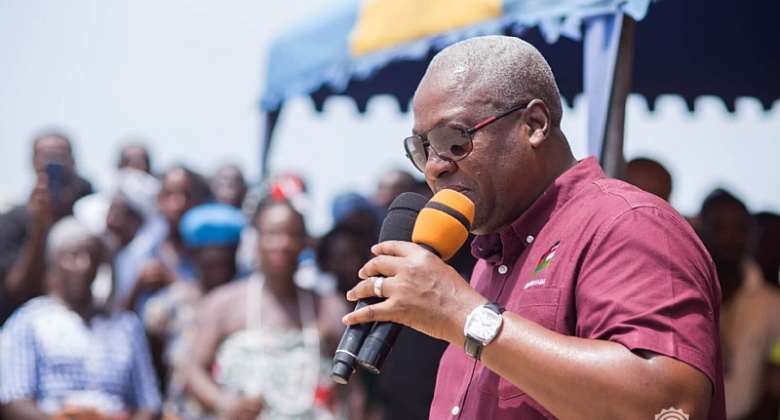 There were speculations that the former President was secretly sponsoring the #FixTheCountry campaign.

According to Mr Mahama, #FixTheCountry demo was not about only the government and the New Patriotic Party (NPP) but an expression of disappointment against the collective leadership of the country.

He noted that the allegation that he had financed the campaigners will not wash and described it as a lie.

He called on the political class and chiefs to listen to the cry of the youth and create sustainable jobs for them because no leader will be spared their wrath if they [youth] decide to go on the rampage over it as their Nigerian counterparts did in the #EndSARS movement.

According to Mr Mahama, if he were president, he would have called a national strategic meeting on “how we can create youth employment, sustainable jobs because no one party has the answer.”

Speaking at a meeting with the Upper East Regional House of Chiefs, as part of his Thank You tour on Tuesday, 17 August 2021, Mr Mahama said: “One of them has been hounded out, ‘Afia Something’ because she can’t take it anymore and, so, she has dropped out but her dropping out has not solve the issue of youth unemployment, it’s still there staring us in the face and the government communicators go and lie that I have given them 85,000 pounds and I’ve given them GHS1.5 million for their demonstration; absolute lie”.

The 2020 flagbearer of the main opposition party noted that “those old Machiavellian tactics won’t work”.

“I haven’t given ‘Fix It’ one single cedi and yet [they want] to demonise their leaders and create the impression that their leaders have collected monies so that you can detach the leadership from their following. For me, I take them seriously because those young people are our children and whether you demonise them or not, the problem of youth unemployment remains and it will continue to grow.”

Mr Mahama explained to the chiefs that he was bringing the issue before them “because you, as our fathers and as a moral voice of society, should be conscious of what is going on”.

“There’s growing insecurity because young people don’t have jobs, many of the armed robbers they are arresting today are our children, they are Ghanaian youth who have dropped out of JHS and SHS or who have finished tertiary institutions and there are no opportunities to find work”, he bemoaned.

“Formerly, if there was armed robbery, we said it was Nigerians [but] today, when you catch armed robbers, you’ll find our Ghanaian youth amongst them”.

“Right now, there’s insecurity in this part of the region. In the night, you must not risk travelling on our highways because your chances of running into highway robbery is very high and, so, these are all things we need to be mindful of.”

Mr Mahama noted that, as the biggest opposition party, the NDC is ready to play its role and will not obstruct government but wants to hold the government accountable and to collaborate with the government where they are doing the right thing in order that life will be better for the Ghanaian people “because one day, however, long it takes, we’ll take the administration of this country again and the country must survive so that when we come into office we’ll be able to continue from where whoever left of.”