The Mounted Novelty Is Here 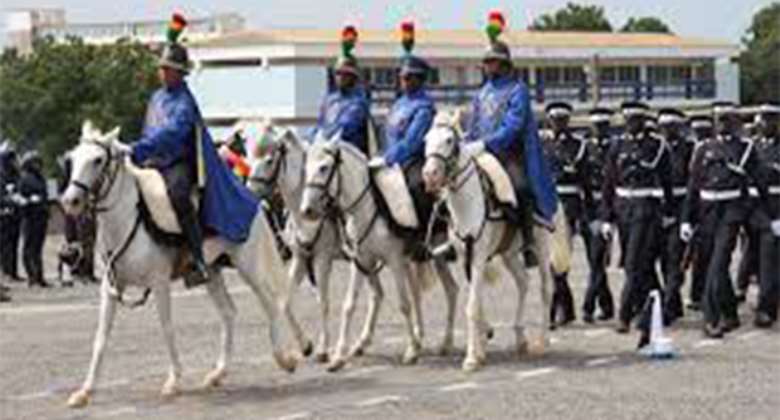 Some communities in Accra have begun witnessing a policing novelty.

Personnel of the Ghana Police Service Mounted Squadron Unit (MSU) previously seen during the presentation of the State Of The Nation Address and other state ceremonies are now patrolling the communities in Accra.

It is a new template which as one of the stories in this edition shows is going to be replicated in Kumasi.

One of the challenges of policing in the country has been the continuation of the colonial period law enforcement regimen. Policing at the time was about the colonial authorities compulsorily drafting labourers for road, railway construction and in some men for military service.

The natives as the Gold Coasters were referred to were escort cops engaged in anti-riot control, guard duties and general enforcement.

The locals came to regard law enforcement officers therefore as agents of the colonial authorities who should be dreaded and even avoided.

Unfortunately deliberate and sustained efforts have not been put in to change the module and bring police officers closer to the people.

With the changing times the operations of some institutions the police not an exception have come to require a rethink.

It is for this reason that we find the deployment of the Mounted Squadron for community policing duties appropriate and in order considering the objectives behind the move.

Acknowledging the compliments of mounted police officers from residents of communities as the former ride through such places is an effective confidence winning means. Indeed the introduction of the unit is intended to achieve this objective.

It is our hope that with time the gulf between law enforcement officers and members of the communities will be narrowed and law enforcement will be the winner; important information needed to break the backbone of criminals will be forthcoming.

In the developed hemisphere police visibility is a feature of cities, playing a crucial role in reducing crime.

Gangs when they are conscious about law enforcement patrols whose horses have the added advantage of navigating through nooks and corners with relative ease can halt the impunity of criminals in such parts of our urban settlements.

With the appropriate orientation the mounted cops will draw communities closer to the Service. We are longing for the day when people will want to learn horsemanship from personnel of the Mounted Squadron through a special arrangement.

The positive impact the novelty has started visiting on law enforcement is heartwarming for which the Police Administration deserves plaudits.

A police which remains static in a fast moving world will not be able to achieve the objectives of the anti-crime campaign.

The Ghanaian adage which states that the signs of a great play or festivity are noticeable at dawn are applicable to the palpable novelties being unfolded in the Ghana Police Service.

It is however important that the novelties are replicated in Kumasi through the acquisition of more horses and communications gadgets of the unit. It is also important to educate the personnel about the objectives of the novelty and the rudiments of public relations.

So far so good, Police Administration carry on.

Latest Photo Reports
Catch up with all the political quotes from our politicians.
Advertise here
More Editorial
ModernGhana Links
What is the E-Levy?
The pain of a teenage 'Kayayo' at night
The Noise Pandemic Will End If We Enforce Laws
The COVID impunity persists
Editorial: Considering the SME lending gap in West Africa
For The Sake Of Road Safety
Our rivers are back
And There Was No Scandal
Kwaku Agyeman-Manu’s loyalty to the grave worth emulating?
TOP STORIES