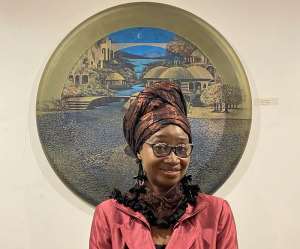 And God said: Be bold and courageous; Have I not commanded you?

Why has the Ghana Parliament approved $1.2 bn for GNPC's 37% stake? It is inflated by a staggering $1.045bn for which Ghana is to provide a sovereign loan? "TOFEAKWA, who said Tweaa" ie Incredulous! How is this "gargantuan" rip off remotely conceivable? Even $200m is too much, so why has over a Billion US dollars been tagged on? It is an Unacceptable, Unadulterated Plain Thievery.

Why is the 37% stake worth $155m being purchased for $1.2bn? This is a spooky, windfall and fortuitous resale after 3 years, to offload their now perceived baggage, to a 13% stake, under pretext of GNPC Co-exploration as a majority shareholder, which Aker Energy is to lead. Is this deal and valuation not simply CRIMINAL?

How can any democratic Government stoop so low as to do this outrageously stinky, fraudulent deal and have the shameless audacity to call insightful CSO's not in favour of this heist, anti-national interest, in reverse oil curse? No wonder the Energy Minister Hon. Mathew Prempeh slapped a gag order on the Petroleum commission aka. Culture Of Silence. It is a ravenous-wolf Akufo-Addo /NPP ironic, unpatriotic, hypocritical government, that cries foul over NDC-inflated projects, doing a surpassing corruption deal, from its miserable conception which has an additional $350m in exploration costs.

The 37% stake dumping for a trumped-up premium, is not in spite of but because of flight to renewables, falling fuel prices and perceived geo-political instability and unprofitability

The AKERS DEAL:
Is undemocratic
It is Unethical.
It Defies Logic.
It is a corrupt deal
It constitutes abuse of Power

IT HAS TO BE STOPPED

The Parliamentary Assent is also premised on deliberate lies and falsehood therefore it is VOID. THE AKERS DEAL MUST SIMPLY BE STOPPED.

EOCO with its Newly "fortified" 75 yr NSC retired, Presidential Appointee, to the rescue?

Ghana is in a Corruption Crisis. Is the new Special Prosecutor "SP" Kissi Agyebeng going to interject a corruption risk - assessment after the President's intervention on the Agyapa deal Report which the Aker deal is replacing caused "SP" Amidu's resignation? What next? Hither Ghana with a "mother serpent of corruption"   overload, rhymes with overlord?

I am utterly confounded and sleepless. Yes, overwhelmed and rendered speechless.

May God Almighty have mercy on a Pityful Ghana with a minerals and energy resource pathos! This GNPC /Aker deal is simply outrageous.

Your ban on radio Ada unjustifiable, affront to press freedo...
19 minutes ago

Doctor who was wrongfully dismissed, reinstated by GHS after...
29 minutes ago