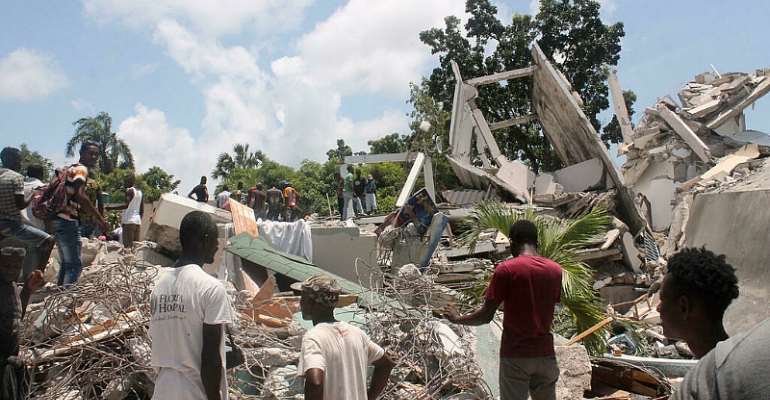 As rescue efforts continue in the wake of Saturday's 7.2 magnitude quake which destroyed thousands of buildings on the Caribbean island nation, the official death toll has now risen to 1,297. Local hospitals have been overwhelmed and are in urgent need of staff reinforcements and supplies.

The death toll from the Haiti earthquake jumped to over 1,200 on Sunday.

Rescue workers continue to search through the debris of collapsed buildings for survivors.

At least 1,297 people were killed in the 7.2-magnitude quake that struck on Saturday about 160 kilometers to the west of the densely populated capital Port-au-Prince, itself devastated by an earthquake in 2010.

Some 13,600 buildings were destroyed and more than 13,700 damaged, trapping hundreds under rubble and leaving more than 5,700 people injured, according to an update from the country's civil protection agency.

In Les Cayes, as in other hard-hit cities on the southwestern peninsula, most of the population spent the night sleeping outdoors in front of their houses -- or what remained of them -- amid fears of further aftershocks.

Hospitals in Haiti's third-largest city near the epicenter of the quake were quickly overwhelmed by the massive influx of injured.

At least 5,700 people were seriously hurt.
"At the time of the earthquake, there were only three doctors in the emergency service," said Dr Michelet Paurus of the main hospital in Les Cayes.

"This morning, it's getting better because we received orthopedists, surgeons and 42 residents" from other hospitals in the department.

Dr Rudolphe Steven Jacques came to the hard-hit area from the capital Port-au-Prince.

"The lack of equipment is chronic," he told the French AFP news agency, gesturing to a woman waiting in a corner with a large open wound on her leg.

"This woman has been waiting for me to do a suture but I don't have a tray for that at the moment."

The United States and other nations have pledged to help Haiti cope with this latest disaster.

US Deputy Secretary of State Wendy Sherman spoke with Haiti's Prime Minister Ariel Henry on Sunday and said the United States was "already putting resources in place" to bolster the country's emergency response.

US Southern Command said it established a joint military task force for Haiti on Sunday and deployed a team to the country to assess impacted areas with aerial surveillance. Four helicopters were also dispatched to provide airlift support.

Chile, Argentina, Peru and Venezuela also offered help, as did the United Nations.

"We want to plan a better adapted response than in 2010 after the earthquake -- all aid coming from abroad should be coordinated by the Civil Protection agency," said Henry.

The latest quake comes just over a month after President Jovenel Moise was assassinated in his home by a team of gunmen, shaking a country already battling poverty, spiraling gang violence and the impact of the Covid-19 pandemic.