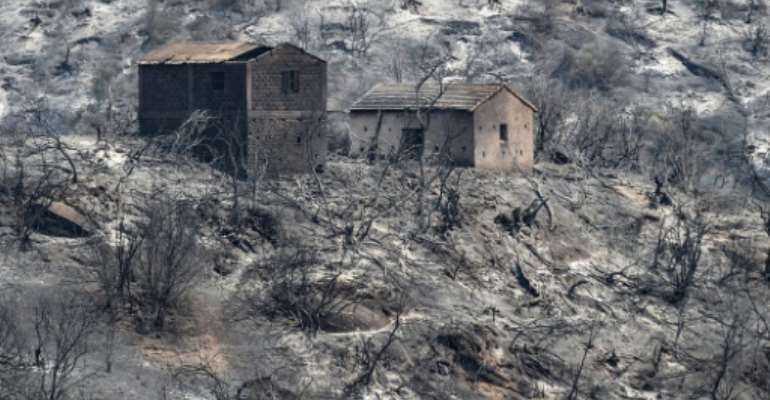 Burned houses stand amidst charred trees, on what used to be a forested hillside in Algeria's Kabylie region. By Ryad KRAMDI (AFP)

Firefighters finally made headway Friday against wildfires that have raged across northern Algeria for days but, as nationwide prayers were held for the dead, anger grew that the country was so ill-prepared.

Fire crews backed by army engineers and civilian volunteers were still battling some 35 wildfires across around a dozen northern provinces, but the deadly blazes in the worst-hit province of Tizi Ouzou were largely extinguished, the emergency services said.

At least 71 people have died since Monday, according to the latest official toll. Authorities have said many of the fires were of "criminal origin".

Firefighters continued to battle blazes in Bejaia and Boumerdes, the other two provinces of the mainly Berber Kabylie region that extends along the Mediterranean coast east of the capital Algiers.

In Tizi Ouzou province, where entire villages have been destroyed -- the terraced orchards that used to be their livelihoods reduced to charred timber and ash -- there was incredulity that a seasonal phenomenon had become such a deadly disaster.

"In Larbaa Nath Irathen, the epicentre of the fires in Kabylie, the experts have only managed to identify 19 of the 25 charred bodies they recovered," the vice president of the Algerian League for the Defence of Human Rights, Said Salhi, told AFP.

"Families are left still searching for their loved ones -- that just piles pain on pain."

Larbaa Nath Irathen serves as the market centre for some two dozen villages deep in the Kabylie mountains that were renowned for their scenery. All have been destroyed or blighted by the fires.

"It's horrific -- there's no other word for it," a villager in his 60s, who gave his name only as Djamel, told AFP by telephone.

"The first rule of government is be prepared. Except here, where every time we do nothing until after the catastrophe, when the damage has already been done."

Another villager, Mohand, had driven to Algiers to find shelter for his family before heading back to help.

"I've never seen anything like it in my entire life," he said. "There are families who have lost everything, absolutely everything.

"I can still smell the odour of charred flesh. It's unbearable. It just won't go away."

Many rural districts of Tizi Ouzou have been left without power, gas or telephone lines.

A family of five was killed when a petrol station in the village of Ain el-Hammam blew up, prompting other stations across the region to switch off their pumps and leaving motorists struggling to find fuel.

'No firebreaks, no hydrants'

Charred trees stretch as far as the eye can see in Tizi Ouzou district, east of the Algerian capital. By Ryad KRAMDI (AFP)

Seasonal wildfires are nothing new in Algeria. But this time high winds fuelled the rapid spread of flames in tinder-dry conditions created by a heatwave across North Africa and the wider Mediterranean.

Meteorologists expect the regional heatwave to continue until the end of the week, after temperatures in Algeria reached 50 degrees Celsius (122 Fahrenheit).

The death toll from this year's fires in Algeria -- far higher than all other Mediterranean countries combined -- has sparked growing criticism of successive governments' failure to invest in fire prevention and control.

Bab Ezzouar University research director Abdelkrim Chelghoum said the country had failed to learn from a series of deadly disasters that hit the country in the early 2000s.

A law detailing measures that needed to be put in place was adopted in December 2004 but its provisions were never implemented, he said.

"The emergency services are struggling on the ground because there are no forestry roads, no firebreaks, no hydrants," Chelghoum said.

"Thanks to oil and gas, Algeria enjoyed dollar windfalls for years. Unfortunately the officials... did nothing."

"If there had been the political will, we could have been better prepared."