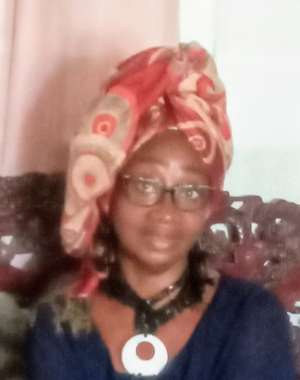 Ghana Montie: Get on your knees, pray fervently and boldly confront the GNPC /AKERS Energy Kwaku Ananse cunning deal. It has a dire straits corruption crater at its irksome and deceptive center.

Regardless of Bank Of America Securities "BOFA", sole sourced as Transaction Advisor, which is part of its glittery packaging, this treacherous speeding fast train is an exceedingly greedy, anti- national interest, "wheel of misfortune". Its fake valuation and sovereign loan component make it a "beggar my country" while I get rich quick "sakawa" scheme, screaming out for a transparent, honest criminal investigation in investment fraud.

Why on earth is the capital allowance of $965m according to the Economic Management Team "EMT" as of 30th June 2021, subsequently stated in a Parliamentary presentation as $1.2b, with an added difference of $235m as at the same 30th June 2021? Who is going to steal the difference in a create loot and share "digitization" sub -deal?

The burning inferno of this ongoing corruption infidelity, with its inferential killer "criminality", must be perused with a fine-tooth comb and very sharp eyes.

Significantly, the listed company Akers ASA states its 50% asset value in Aker Energy Ghana as $107m (NOK 0.96 billion) and the remaining shares owned privately by the Owner making an overall holding of approx. $230m as declared for the listed and unlisted AKER conglomerate.

Consequently, this makes even the Economic Management Team's $965m which is supposed to be a 37% stake, a mind boggling grossly inflated figure? How can GNPC's 37% be equal to $965m when Aker's 50% equals $230m making the lower Ghana stake valuation higher by $735m.

Furthermore, the fact that Ghana's Parliamentary Representatives have been told the asset is worth up to $2.5b thus discounted to $1.2b, (half price) for the 37% stake is a most ludicrous assertion to throw dust into Ghana's already sore red eyes with this sordid "anansesem" tale which sorry, but candidly rhymes with "nkwaseasem",ie Sheer folly in intriguing financial engineering discord.

Again, if the cumulative very influential Akers Partner in Ghana POWER circles, Akers ASA / Akers Energy Owner's 50% equates $ 230m how can GNPC Explorco's 37% stake be valued at $1.2 b with a trumped-up difference of $970 m accruing to the lesser partner as presented to Parliament? Makes no sense at all. This would make the rather worldly, streetwise, and shrewd Akers ASA an extremely stupid investor? Not at all.

Meanwhile the Akers ASA /Akers Energy / Akers -AGM global Partner has its own convoluted partly registered versus unregistered Private co. with its own complicated valuation scheme with an Owner who has served a brief jail term in Norway in 2005 for a Corruption Conviction for illegal purchase of a boat - license, before being released on parole.

But this Ghana deal is a by no means minor business incursion as it includes apart from the 50% stake in the Deep water Tano Cape three points (DWT/CTP), a 70% stake in south Deep water Tano (SDWT) and a Pecan Phase currently on indefinite hold for apparent unprofitability. But is the entire deal beneficial to Ghana's national interests?

A debt -ridden bankrupt Ghana is also to provide a commercial loan of $1.2b to $1.65b to GNPC Explorco to finance this dubious acquisition in "double jeopardy diement" which is supposed to give it operator status without any in built technology transfer in an "Energy world moving away from fossil fuels towards Renewables" which is what they claim to be fixing.

Dear God, More Debt Financing of heinous inflated figures to dupe Ghana that is already on its financial knees by Vice President Bawumia and his Economic management dream team, but, for whose insatiable benefit?

The crucial question is: Why is this deal, with its hugely skewed valuation deemed so risky that it cannot on merit get Project financing, but it can depend on sovereign debt and has been rapidly rubber stamped through a Ghana semi- conscious, see no evil Parliament that does not represent its constituents? What due diligence was done?

Something is seriously amiss in the governmental frenzy to push this deal through at all costs, even if it totally derails Ghana's very fragile downward spiralling debt -ridden economy.

What kind of merciless daylight national Rape is being conducted by the EMT headed by Veep Bawumia under the auspices of Hon Mathew Prempeh, the Energy Minister who presented the parliamentary heist?

Is the GNPC/ Akers energy deal the Campaign Finance capital Resource and the source of the NPP''s declared confidence of winning the 2024 election to break the 8 yr jinx?

The absolutely nightmarish Akers deal, complete with its own Special Purpose Vehicle (SPV) in semblance to and as a Probable Replacement for the Agyapa deal which is in the doldrums awaiting revival, also has an interesting tit bit.

It is noteworthy, that the lady in charge of Akers Energy in Accra was Head of Investments and Business Development for Ghana's Veep Bawumia, before her Akers appointment in a connecting dot of the thickening plot.

Should the Vice President, Energy and Finance Minister 's not hang their hats in serial resignations or be sacked by President Akufo Addo, who let me guess, will deny knowledge as though he has abdicated Command and Control Power to the EMT, which has his eyes and ears all over it. AND where is the President's moral gravitas?

In an indirectly relational surreal case, of Sputnik V pricing, involving the Health Minister, how callous, that Ghana's self-proclaimed "purse protecting" President can make a caustic suppressive joke, that Hon. Agyeman Manu, who ironically but for a Norwegian whistle-blower, would have dissipated public funds and saddled the country with an oppressive, virtually double priced Sputnik V Costs, is suffering!

Is the Health Minister secretly suffering over the loss of hidden kickback offerings?

Thank you, Norway, for also whistleblowing on the corrupt and unchaste attempted Oslo consular building purchase. But I digress.

For such a sickening covid deal, why can Agyeman Manu not be sacked in a shameful Akufo Addo animal-farm Ghana? And, why is the unfazed President pulling a despicable and divisive ethnic card, saying Agyeman Manu is a Bono man, so what? Is being a Bono man a defense? This is a watershed moment of a failed Presidency.

Indeed, birds of the same derailed family plumage flock together. How can the insensitive complicit Finance Minister Ken Ofori - Attah who authorized payments without underlying legitimate lateral clearance, cheekily and cruelly seek empathy for the Health Minister in literal self-defence?

Ratification which is a loophole for rubber-stamping non- transparent government deals, was not even sought, in this bragadacio health slaughter, which is not for laughter, being justified in Presidential jest. Ghana "ahunu amane" in the hands of Ken Ofori Attah who should have been sacked over messy "Agyapa" And should be at the very least equally sacked over Sputnik V.

Who would have thought that an Akufo - Addo Presidency after all the hue and cry would be such a demoralised farce? Our broken walls are not being rebuilt by H.E Akufo Addo and his " Sin" cathedral that seeks food out of the mouths of would- be "thin" children, to feed an ego project for himself with a godly cover-up as his principal prerogative while wicked nation wrecking deals are being hatched.

Like the biblical King Saul, has he not been rejected as a lame duck President carrying his throne about, away from the seat of his "defiled" throne after his broken promises? God is not a God of Corruption but of Righteousness and does not desire Cathedral Sacrifices but a Sincere Heart.

Ghana is losing dignity worshiping crooked money as its demigod under the Akufo-Addo Presidency. How can we have an "incorruptible" President who is overseeing "scent no - ooo scent no, corruption scent no, Agye baabia, while crying out for debt forgiveness to return us to HIPC scent no Agye babiara" status!

Both President NADAA and Mr. Ken Ofori Attah are out and about, globe-trotting for debt forgiveness, proclaiming in essence, failure to manage the economy. Whereas H.E Vice President Bawumia sings a souless alleluiah chorus in political religiosity, also joking about a well-managed economy that issues vicious circuitous over- subscribed bonds to pay for interests on earlier bonds and salaries in a bankrupted bondage economy which the AKERS Deal will ultimately collapse.

Wereas The "dream team" cannot pay the principal on cumulative debts sinking Ghana in a debt quagmire, a youthful generation that is futuristic in its fixation is being damned while shouting unheard at roof tops for national fixing.

This undaunted K.A. Busia daughter, will not and cannot sit quietly, regardless of whatever sacrificial cost, and have my father's "footprints in the sand legacy" and my personal contribution to developmental security, fakery embroiled in the unfolding NPP Danquah"Busia"Dombo National Treachery, and utterly destroyed.

I ponder in disquiet. Dear God, almighty to whom all power belongs. Is there no one in Ghana or globally who can call our President and his mean core team to meaningful Order?