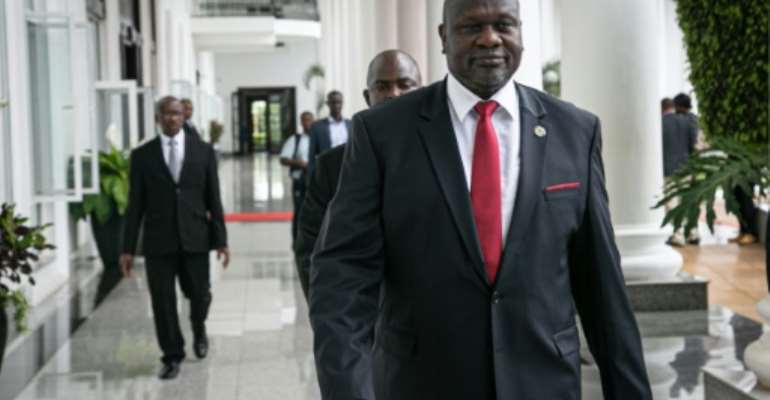 Analysts say the bickering leaves Machar in an increasingly precarious position as he attempts to implement a peace process which is already lagging behind schedule. By Michael O'HAGAN (AFP/File)

The international community Thursday urged an end to political feuding in South Sudan as Vice President Riek Machar suffered a fresh blow when his deputy quit to join a rival military faction.

The infighting gripping Machar's movement and deadly weekend clashes has raised fears for the already fragile peace process in the world's youngest country.

At least 32 people were reported dead when violence broke out Saturday, just days after Machar's foes in the Sudan People's Liberation Movement/Army-In Opposition (SPLM/A-IO) said they had ousted him as party leader and head of its armed forces.

"To ensure that South Sudan moves away from the legacy of conflict, the fostering of divisions and splits of parties must... stop," the so-called Troika of Britain, Norway and the United States said.

The statement came days after East African bloc IGAD warned that the spat "is beyond an intra-party crisis and bears significant immediate and long-term implications" for the troubled nation.

On Thursday, Henry Odwar, the movement's deputy chairman and South Sudan's former mining minister, announced that following his resignation from the government a day earlier, he was switching loyalties to General Simon Gatwech Dual, who has led the push to oust Machar.

In a signed document seen by AFP, Odwar accused Machar of sidelining other members in a bid to "single-handedly" direct the party's affairs and said the new faction would "steer the movement and chart (a) more democratic and people's centred path."

The two men, who did not share a close personal relationship despite years working together, were reportedly at loggerheads for some time.

Analysts say the bickering leaves Machar in an increasingly precarious position as he attempts to work alongside his former foe President Salva Kiir to implement a peace process which is already behind schedule.

"By splitting itself... (the SPLM/A-IO) becomes a weak partner and a weak partner is not good in the implementation of the peace agreement," Okuk told AFP.

"This will give President Kiir an upper hand now to be in control of politics in the country."

But Machar's spokesman Puok Both Baluang told AFP such fears were overblown, and charged Kiir loyalists with stoking the divisions.

"We believe the security organs in this country are the ones behind that," he said, accusing the president's camp of deliberately delaying implementation of the peace deal "so that defections happen".

The warring factions in Machar's movement have announced a temporary ceasefire, with each blaming the other for Saturday's violence.

The UN Mission in South Sudan (UNMISS) also voiced its concern Thursday over the SPLM/A-IO divisions and called for all factions and all signatories to the peace process to "work together to overcome their differences peacefully".

South Sudan has struggled with war, famine and chronic political and economic crisis since celebrating its hard-fought independence from Sudan in July 2011.

As discontent has deepened, some citizens have called for a peaceful public uprising to topple the current regime.

The hand of a young South Sudanese refugee at a camp in DR Congo is seen on a wall filled with drawings and writings depicting scenes from home (2019 file picture). By JOHN WESSELS (AFP/File)

At least two prominent activists were arrested last week after they signed a declaration by a coalition of civil society groups calling for Kiir and Machar to go.

On Thursday, the Troika urged the government to respond to "legitimate grievances".

"It is important for those voices to be heard and for freedom of expression to be protected".

Since he signed a power-sharing deal with Kiir, 68-year-old Machar has faced growing opposition within his own ranks, with top cadres complaining they had lost out to the ruling party.

Machar has said the recent squabbles are aimed at derailing the formation of a unified armed forces command, a key component of the peace deal.