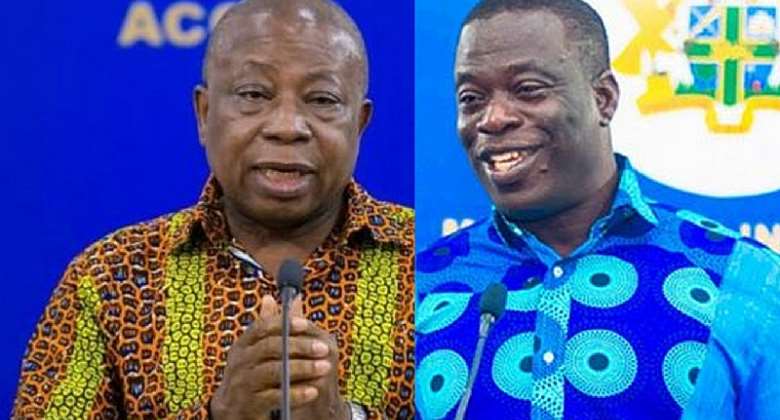 President Nana Addo Dankwa Akufo-Addo on Tuesday, singled out two illustrious sons of Bono Region and praised them for their sterling contributions towards the advancement of his government.

He said his government acknowledged and appreciated the exceptional commitment and support of Mr. Ignatius Baffour-Awuah, the Minister of Employment and Labour Relations and Mr. Kwaku Agyemang-Manu, the Health Minister.

Mr. Baffour-Awuah and Mr. Agyemang-Manu are natives of Nsoatre and Dormaa-Ahenkro and the Members of Parliament (MP) for Sunyani West and Dormaa Central respectively.

President Akufo-Addo said his government would be forever grateful to the two Ministers and the chiefs and people of the region as a whole, and assured he would accordingly ensure the region equally benefited from the sharing of the national cake.

Traditional Area, as part of his two-day working visit to the Bono Region.

President Akufo-Addo said he was aware Mr. Agyemang-Manu was going through serious public criticism in the midst of the Coronavirus Disease (COVID-19) pandemic, but his general contribution in managing the disease

in the country was exceptional and laudable.

The President also commended Mr. Baffour-Awuah, saying he had performed creditably in the labour front since his appointment as the sector minister.

President Akufo-Addo announced his government had also appointed Mr. Kwasi Ameyaw-Cheremeh, the MP for Sunyani East as the Board Chair of the Bui Power Authority (BPA).

At Wamfie, the President promised to ensure a girl's dormitory would be constructed and a school bus provided for the Mansen Senior High School.

Barimah Ansu Agyei, the Chief of Wamfie expressed appreciation to the government for the on-going upgrading of the Wamfie-Adiembra phase one

and two feeder road in the area.

On completion, the chief said the road would facilitate the movement of the people and their economic activities, and appealed to the President to facilitate construction of access road in the town and Dormaa-Akwamu.

The President, who later inspected progress of work on the 36.50-kilometre stretch, said he was impressed about work done, and asked the contractor to complete the project on schedule.

The factory runs a closed-circuit value chain system with the capacity to process 40,000 metric tonnes of fresh tomato concentrates and has shelf life

of 24 months and would provide direct jobs to 158 people and indirect jobs for the produce of fresh tomato by more than 2,000 tomato farmers in the area.