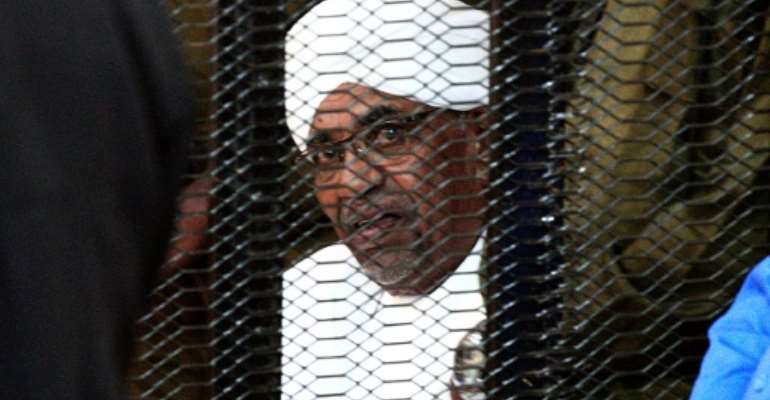 Sudan's deposed president Omar al-Bashir looks on from a defendant's cage during the opening of his corruption trial in Khartoum on August 19, 2019. By Ebrahim HAMID (AFP/File)

The "cabinet decided to hand over wanted officials to the ICC," Mahdi was quoted as saying by state news agency SUNA, without giving a time frame.

The cabinet's decision to hand him over came during a visit to Sudan by ICC chief prosecutor Karim Khan, who met with Mahdi on Tuesday.

But the decision still needs the approval of Sudan's transitional ruling body, the sovereign council, comprised of military and civilian figures.

On Wednesday, Khan met with the leader of the sovereign council, General Abdel Fattah al-Burhan, as well as Mohamed Hamdan Daglo, its deputy chair.

Daglo said Sudan "is prepared to cooperate with the ICC," SUNA reported.

ICC spokesperson Fadi El Abdallah did not comment on the announcement, saying Khan was "in Khartoum to discuss cooperation matters", but that the prosecutor would hold a press conference on Thursday afternoon.

The transitional authorities have previously said they would hand Bashir over, but one stumbling block was that Sudan was not party to the court's founding Rome Statute.

But last week, Sudan's cabinet voted to ratify the Rome Statute, a crucial move seen as one step towards Bashir potentially facing trial.

The Hague-based ICC issued an arrest warrant for Bashir in 2009 for war crimes and crimes against humanity in Darfur, later adding genocide to the charges.

Bashir was ousted by the military and detained in April 2019 after four months of mass nationwide protests against his rule.

The former strongman was convicted in December 2019 for corruption, and has been on trial in Khartoum since July 2020 for the Islamist-backed 1989 coup which brought him to power. He faces the death penalty if found guilty.

Amnesty International has previously called for Bashir to be held accountable for "horrific crimes", referring to the genocide in Darfur.

Bashir waves to the crowd at the inauguration of a factory near Al-Dewaim city in White Nile state on July 11, 2012. By ASHRAF SHAZLY (AFP/File)

In July, a peacekeeping force completed its withdrawal from the war-ravaged region.

But after years of conflict, the arid and impoverished region is awash with automatic weapons and clashes still erupt, often over land and access to water.

ICC judges said in July he would be the first suspect to be tried over the Darfur conflict, facing 31 counts including murder, rape and torture.