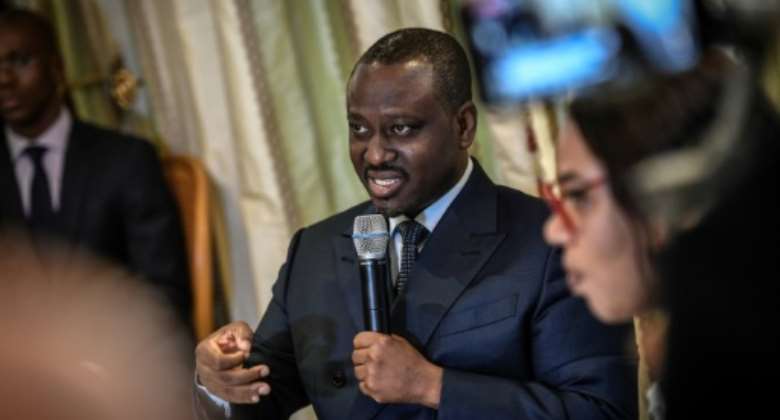 Sess is a leader of the GPS party founded by ex-PM Guillaume Soro, shown here, a close ally of President Alassane Ouattara before they fell out. By STEPHANE DE SAKUTIN (AFP)

A prominent Ivorian political figure who has been sentenced to a 20-year jail term in absentia has been detained in Mali's capital Bamako, his party and a Malian security source said Wednesday.

Mohamed Sess Soukou, also known as Ben Souck, "was arrested in the streets of Bamako by four men in civilian clothes wearing balaclavas," his GPS party said in a statement.

"Under armed threat, Mr. Sess was forced to get into a 4x4 with tinted windows and without licence plates. He has been missing since then," it said.

The arrest happened on Tuesday, the statement said.

A Malian security source, speaking on condition of anonymity, said "Ben Souck was detained for investigation. I cannot say more for the time being. He is well and all his rights are being respected."

A Malian judicial source said Ivory Coast had filed an arrest warrant against him.

Sess is a former MP and mayor of the town of Dabou, near Abidjan, Ivory Coast's economic hub.

He is a leader of the Generations and Peoples in Solidarity (GPS) party founded by former prime minister Guillaume Soro, who was once a close ally of Ivorian President Alassane Ouattara but fell out with him in early 2019 and went into exile.

In June, Soro was given a life sentence in absentia for fomenting "civil and military insurrection" when he tried to return home in December 2019.

Among the other defendants at the trial, Sess was given a 20-year term in absentia on a charge of endangering state security. The GPS party was ordered to be dissolved.

"We don't know what they are accusing him of," an ally of Sess said, adding that his supporters were hiring a lawyer.

Soro, 49, was a rebel leader whose forces controlled northern Ivory Coast in the first decade of the century, during the turbulent presidency of Ouattara's predecessor, Laurent Gbagbo.

It was Soro's military help that tipped the situation in Ouattara's favour when conflict erupted after Gbagbo refused to accept election defeat in October 2010 and was forced out of office.

Soro was rewarded with the appointment as Ouattara's first prime minister, and then moved to the position of speaker of the National Assembly in 2012, a post he held until he and Ouattara fell out in 2019.

We must be decisive in preventing domestic inequalities — Dr...
14 minutes ago