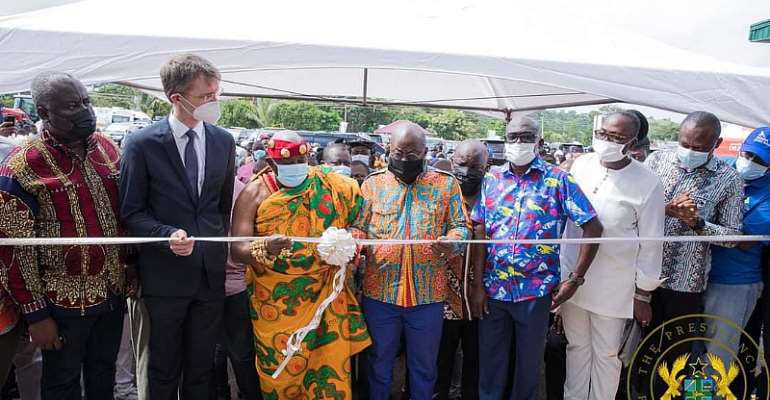 President Akufo-Addo has inaugurated a $16 million Weddi Africa Tomato Processing Factory and Agro Farms at Domfete near Berekum in the Bono region.

Plans to set up the factory began in 2019 under the government’s One-District One-Factory initiative with funding by Eximbank Ghana.

The factory is said to be running a closed-circuit value chain system and so no aspect of tomato is left to chance.

The factory has a 500-ton cold room to hold fresh tomatoes, a 30-acre model farm and a research centre designed to conduct seed trials and train farmers on best farm practices.

It also has an agric-input shop to supply inputs to its farmers promptly and at affordable prices as well as a 2,400 acre farmland for use as its “Nucleus farm.”

Besides, management has registered and trained over 2,000 farmers in and around Berekum to facilitate the production of fresh tomatoes for the factory.

The factory currently employs 158 permanent staff with plans to expand it to 350 in the next six months.

President Akufo-Addo, who inaugurated the factory as part of his two-day tour of the Bono region, was impressed about the completion of the factory and commended management and staff for the work done.

The President and his entourage later paid a courtesy call on the Wamfiehene, Barimah Ansu Agyei, who is also the Krontihene of the Dormaa Traditional Area.

He promised to provide Mansen Senior High School at Wamfie with a bus and also see to the construction of a new Girls Dormitory for the school.

He also assured the people of the area that the health centre in the area would be expanded to adequately cater for their health care needs.

President Akufo-Addo was accompanied by Bono Regional Minister, Justina Owusu Banahene; the MP for Sunyani West and Minister of Employment and Labour Relations, Ignatius Baffour-Awuah, the MP for Dormaa Central and Minister of Health, Kwaku Agyeman Manu; Deputy Attorney-General, Alfred Tuah-Yeboah and the MP for New Juabeng South and theDeputy Minister of Trade and Industry, Okyere Baafi as well as other high-ranking government officials.

15 Assembly Members, others granted bail for cursing Regiona...
55 minutes ago