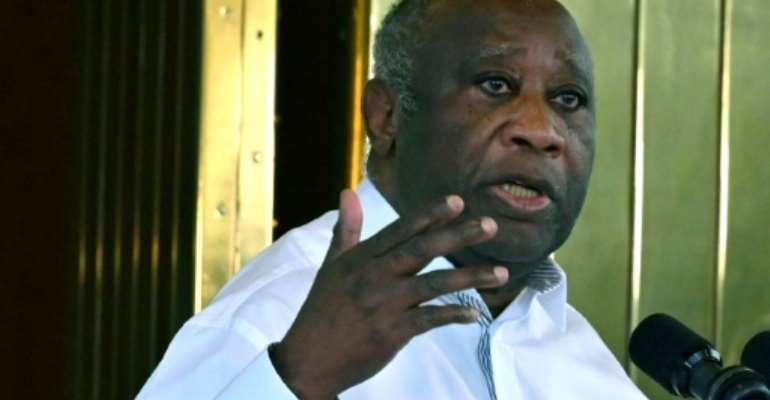 Gbagbo only returned to Ivory Coast in June. By Issouf SANOGO (AFP)

Former Ivory Coast president Laurent Gbagbo's push to set up a new party points to another tilt at the presidency in 2025, say analysts.

Gbagbo announced his plans for a new political vehicle on Monday, less than two months after he ended a decade-long absence from the political scene.

He spent an enforced exile abroad, which began in humiliation when he was hauled off to the International Criminal Court to face charges of crimes against humanity, and ended in triumph with his acquittal.

Unable to regain complete control of the main opposition Ivorian Popular Front (FPI), which he founded, the 76-year-old veteran's decision to make a fresh start with a new party indicates his political dreams remain undimmed.

If he wishes to make another run at the presidency, he needs a party that is entirely his own, say commentators.

"A thunderbolt," said Tuesday's headline in the independent daily Soirinfo, noting that it was the first time Gbagbo had spoken out on the divisions inside the FPI since he founded it 39 years ago.

The party split in 2015, when Gbagbo was still fighting his case in The Hague.

One side is led by 68-year-old Pascal Affi N'Guessan, who served as prime minister under Gbagbo.

The other side is the so-called "GOR" faction -- from the French words meaning "Gbagbo Or Nothing" -- backed by grassroots members who fervently support the former president.

Unable to heal the divisions, Gbagbo chose instead to slice the Gordian knot, setting up a new party and leaving Affi N'Guessan with whatever is left. A congress to found the new party could take place in October.

"Let's leave Affi with the envelope," he said in Monday's speech to the FPI central committee: he and his followers would "take the contents".

"The FPI is us" from the top to the bottom of the party, he said. "We are going to change name, that's all."

He was dismissive of his former protege, to whom he offered the prime minister's job and leadership of the party when he won the presidency in 2000.

"When you go to one village or another, you come across a stone," he said of his rival, employing the folksy language he favours.

"(But) you don't go out of your way to fight a stone, you jump over it or you go around it, and that's what we are going to do."

Affi N'Guessan meanwhile has denounced what he described as "a decision dictated essentially by the thirst for power and the desire for revenge" at the upcoming presidential election.

This was not an easy decision for Gbagbo, notwithstanding the light-hearted manner in which he announced it, says Ivorian political analyst and writer Yves Ouya.

"The FPI is his other self, which has accompanied him throughout his political fight, from opposition into power."

Gbagbo and Ouattara smiled for the cameras, but they may yet soon be engaged in another political battle. By Issouf SANOGO (AFP)

Political analyst Rodrigue Kone said Gbagbo's decision showed he was "taking a combative stance in the run-up to the 2025 presidentials.

"He needs a well-organised political apparatus that is his own."

Fellow analyst Ouya agreed. Gbagbo, he says, "will try to take power in 2025, and he needs a vehicle that can give him every chance of achieving that".

It was Gbagbo's refusal in 2010 to accept electoral defeat to the current president, Alassane Ouattara, that sparked the political violence that left 3,000 dead in just a few months -- and led to his trial at The Hague.

Once Gbagbo was acquitted, Ouattara gave him the green light to return home.

When the two rivals met at the end of last month for the first time since the disputed election, they smiled for the cameras and insisted that past conflicts were behind them.

In a few years however, they may be facing off again in another electoral battle.

German elections: what to expect
4 minutes ago