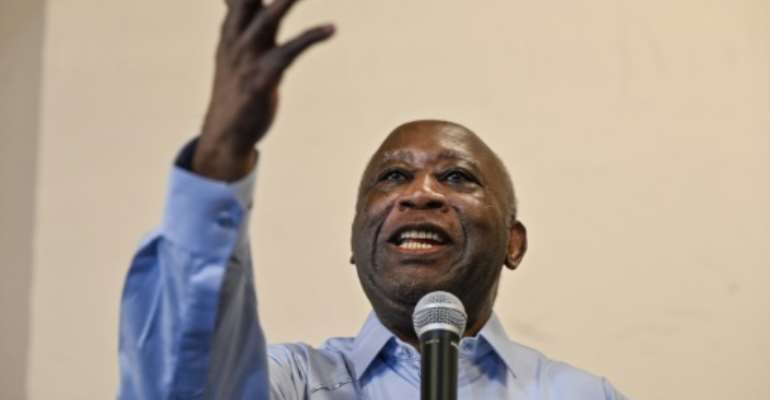 Gbagbo returned to the political spotlight in June after nearly a decade abroad, and being tried and acquitted of crimes against humanity by the ICC. By Sia KAMBOU (AFP)

At a crunch meeting of party leaders, Gbagbo lashed out at his former prime minister, Pascal Affi N'Guessan, the FPI's president, and proposed "creating a new instrument of struggle in line with our ideology and ambitions", the FPI said.

A congress to set it up could take place in October, it said.

In a statement to AFP, Affi N'Guessan slammed the move as being "dictated essentially by a thirst for power and the desire for revenge".

In 2010, he refused to concede election defeat to the current president, Alassane Ouattara, sparking a months-long civil conflict that claimed some 3,000 lives.

He returned to national politics in June after being dramatically acquitted at the International Criminal Court of crimes against humanity arising from the bloodshed.

During his years in prison in The Hague, a deep rift developed in the FPI, which Gbagbo founded in 1982.

One side is headed by 68-year-old Affi N'Guessan, who leads a so-called "legal" faction -- a term that stems from the judicial authorities' acknowledgement of his position as party president in 2015.

The other side is the so-called "GOR" faction -- from the French words meaning "Gbagbo Or Nothing" -- backed by grassroots members who fervently support the former president.

Monday's statement quoted Gbagbo as saying that the FPI, "our sole instrument of political struggle, has been confiscated by Mr. Affi N'Guessan, and despite the many attempts to reason with him, he insists on his so-called 'legality'".

Gbagbo "has acknowledged Mr. Affi N'Guessan's willingness and stubbornness to take the FPI hostage, trampling on years of sacrifice by the men and women who are party activists".

He asked the FPI's central committee to authorise setting up a committee to prepare for a "constitutive congress" to create a new party, the statement added.

Former prime minister Pascal Affi N'Guessan is president of the Ivorian Popular Front (FPI) which was founded by Gbagbo. By SIA KAMBOU (AFP)

In his statement to AFP, Affi N'Guessan said Gbagbo bore responsibility for the split.

"In response to my request for an audience, my willingness for dialogue with a view to the FPI's unity, Laurent Gbagbo has chosen rupture and division. He has crushed the hope our activists, electorate and sympathisers had in the unity of the left, in the reconciliation of our political family," he said.

Several attempts to bridge the rift following Gbagbo's return failed, and last week the "legal" faction mounted a rearguard action after the former president convened a meeting of the party leadership.

The faction said that Gbagbo, despite his status as a "founder member of the party", was not the current president of it.

The "legal" FPI "will fight the cult of personality, autocracy, the road to dictatorship, with all its strength", it added.

Gbagbo, a powerful orator, rose in the 1970s as a left-wing campaigner who helped end Ivory Coast's one-party system following independence from France in 1960.

He wields significant clout among poorer Ivorians, who see him as a supporter of the underdog.

Police smoke out Shatta Wale, handcuff him for faking gun at...
22 minutes ago