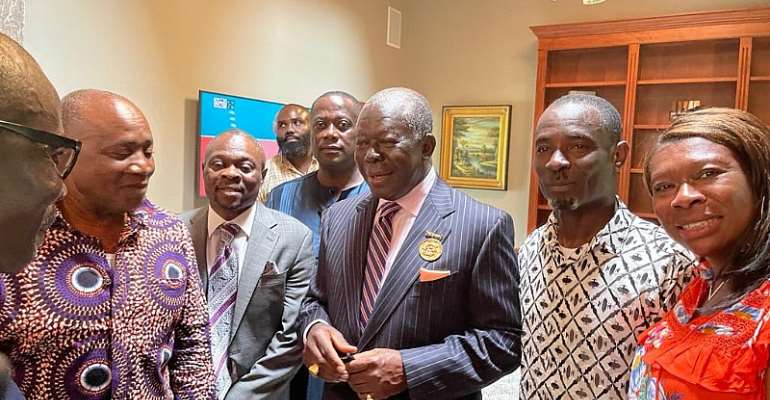 His Royal Majesty Otumfuo Osei Tutu II, the Asantehene, has urged the members of Asanteman Association of New York to live in peace and unity, respect for each other, work for progress and the interest of the Association.

Otumfuo Osei Tutu II noted that there is currently no Asantefuohene (Chief) in New York and that the Association should HOLD ELECTIONS within three months to elect a new Chief, Queenmother and other officers of the Asanteman Association and and work in harmony to bring peace.

The Asantehene explained that some of the information which had been going around was without his knowledge and that such misinformation should stop since it's does not urge well.

Otumfuo Osei Tutu II advised Nana Attakora Amaniampong that he should be humble, honest and go back to the orginal mainstream of Asanteman Association which is Nana Tieku Acheampong's camp.

Oheneba BoaChie-Adjei Woahene II’s committee allowed each of the feuding camps to present their case before the gathering and questions were asked from them.

Mr. Kwaku Agyeman Duah the executive secretary of ACONA, Mr Kwabena Boasi and some chiefs and queen mothers who made a petition to Nana Hiahene's committee that Nana Amaniapong is arrogant, divisive, parades lies, drunkard and dishonest behaviour and due to that they could not let Nana Amaniapong to be their chief.

The Council of Elders of Asanteman Association will work with the Peace Accord cmt to select a neutral Electoral Board for the new elections.

Earlier on, a word from Manhyia stated that His Royal Majesty Otumfuo Osei Tutu II, the Asantehene, had given the mandate for Nana Attakora Amaniapong to swear-n the oath of allegiance to His Majesty’s special envoy, Oheneba Akwasi Abayie, the Akonferehene, on 25th August 2021, which was found to be a false information without the knowledge of the Asantehene, Otumfuo Osei Tutu II.