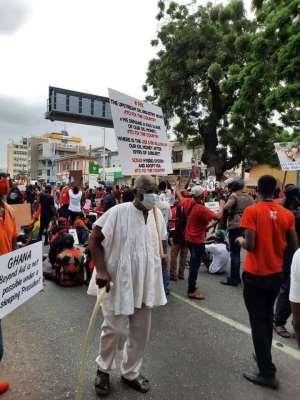 The National Cathedral, the issue of dwindling tithes in places of worship and the replacement of the current Constitution stood tall in the demands of the NDC-powered #Fixthecountry campaigners a few days ago.

These were captured in varying ways on the placards distributed to the demonstrators by the organizers, the party activists who would rather their identities are concealed for obvious reasons.

The tithe pastor was speaking for his church at Asylum Down and his predicament could be shared by pastors of his ilk elsewhere. Only such persons could be so reckless in stating their predicament.

Little wonder the media highlighted the tithe pastor's segment of the demonstration in their reportage. We found it interesting how the man said the demonstration was neither against the NDC nor the NPP yet as he put it 'it was against bad governance.'

That was palpable lie the pastor's opprobrium for the NPP known to residents of the part of Asylum Down where his place of worship is situated.

It would be interesting to find out how much the head pastor has lost so far since the emergence of the COVID-19 pandemic.

Perhaps the pastor has to be reminded about the nature of the COVID-19 pandemic fallouts so that he does not go about turning himself into a laughing stock the way he did.

Some persons have even postulated that the dwindling tithes as being referred to is occasioned by the abandonment of churches operated as sole proprietorships, owners who indulge in predicting foreign football matches.

There is no doubt that many crooks have managed to acquire the collar and duping innocent persons using the name of God.

When with time such persons discover their folly they of course would advise themselves accordingly and pick up membership of real churches founded on Christian doctrines. Let the Asylum Down head pastor search his operations to find out what has really gone amiss. Attributing the downward spiral in his monetary fortunes to the management of the government can only be laughable.

As if the head pastor's #Fixthecountry NDC-powered demonstration was not enough venom one of the placards lashed at the National Cathedral project.

The foregone failed because it was intended to incite Ghanaians against constituted authority by the employment of lies.

With the state not providing the funding for the construction of the cathedral there is absolutely no sense in creating the impression that the source of money is the public kitty.

In a country with the kind of #Fixthecountry personalities it would be foolhardy to source funding for such a project from the public kitty, an absolute unwise thing to do.

Standing on mendacity to prosecute a political project, no matter how camouflaged this is, cannot stand the test of time.

Those behind the political agenda of the so-called #Fixthecountry are known even when they hide their party colours under their sweaty armpits.

Latest Photo Reports
Catch up with all the political quotes from our politicians.
Advertise here
More Editorial
ModernGhana Links
What is the E-Levy?
The pain of a teenage 'Kayayo' at night
The Noise Pandemic Will End If We Enforce Laws
The COVID impunity persists
The Mounted Novelty Is Here
Editorial: Considering the SME lending gap in West Africa
For The Sake Of Road Safety
Our rivers are back
And There Was No Scandal
TOP STORIES