I believe Nana Akufo Addo will agree with me now, when I said he thought being a president is very easy 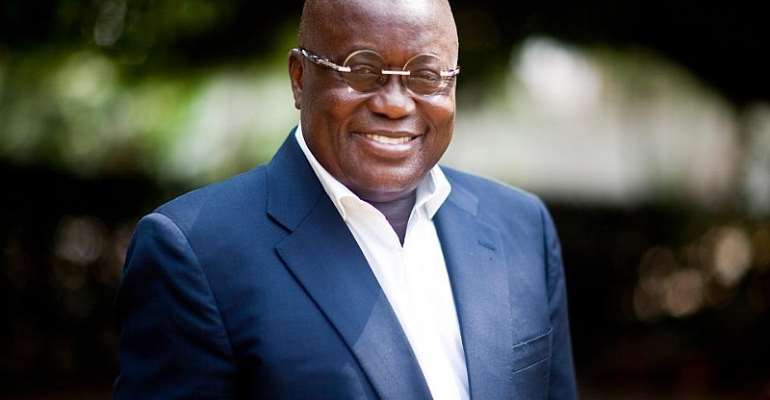 The President of Ghana, Nana Akufo Addo
It was October 21, 2019, after following and analyzing the government of Nana Akufo Addo, even though I am neither a prophet nor a clairvoyant, I quickly realized the doom Ghana faces, yet many Ghanaians wouldn’t like to accept this simple truth, due to tribalism.

I listened to my instincts, wrote an article captioned, “Akufo Addo Had Thought Being President In Ghana Is Very Easy,” and was published by ModernGhana News. Reference - https://bit.ly/3CeNhRo.

I am not surprised that the current chaotic political atmosphere in the country and the economic hardships the common Ghanaians are experiencing daily, confirm what I wrote. In that article, I said:

It is very likely that Nana Akufo Addo initially thought it's as simple as reciting A B C D, to be the president of a country. Like spectators watching a football match, they keep attacking and criticizing the players, until they swallow their pride in shame when they are given the opportunity on the field to play a match.

Ghana is a country that has suffered a great deal by series of a military governments, poor governance, and corruption. Despite the rich resources in the former Gold Coast, many Ghanaians living conditions in the country are very tough due to the high rate of employment and corruption.

It’s therefore, not surprising after the NDC in power for the longest period in Ghana’s political history, dissatisfied Ghanaians experiencing the mild-economic hardships demanded a change, as they put their trust in Nana Akufo Addo, due to his promises, unfortunately, things haven’t been all easy for Akufo Addo.

It’s very clear that Akufo Addo lacks leadership skills. As the President of Ghana, he represents the national unity and is the guarantor of the Constitution and the commander-in-chief of the Armed Forces but the president lacks the knowledge of creating a flexible economy despite appointing the largest ministerial posts in the country.

The president doesn’t seem to know that the economy of a good country thrives on hard work and an effective judiciary. Ghana has one of the weakest judiciary systems in the world, where elites in the country and other foreign nationals break the law with impunity because many of the culprits collaborate with corrupt government officials.

Efficiency is always a question of the effectiveness of action over time, yet, Akufo Addo government doesn’t seem to understand that a country’s economic policy is aimed to create jobs and boost growth by encouraging smarter use of financial resources, eliminating obstacles to investment and offering visibility and technical assistance to investment projects.

Ghanaians can’t ignore the fact that ex-president John Mahama was involved in many corruptible deals that affected the growth of the country but the fact which Ghanaians can’t also ignore is within three years in office, Mahama did well during his tenure than the current president with elephant size ministers.

The unemployment rate in Ghana is the number of job seekers as a percentage of the workforce. This should be an important indicator from both a social and an economic point of view to Nana Akufo Addo, instead, he chose to build a Cathedral. Which part of the world will be proud of such a leader? Only, the non-intelligent Ghanaians will praise such a leader.

In politics, you don't have to give promises or false hope to psychologically-economic tormented people, if you have no skills to achieve that. Whether Akufo Addo has been in office for a long or a short period, he is a complete failure because he and his over 110 ministers have disappointed Ghanaians.

Mr. President, believe me, you are surrounded by people and political advisors that don't care about you. Please, if you want to be a successful leader, read the articles of those that often criticize you to make you a better leader.