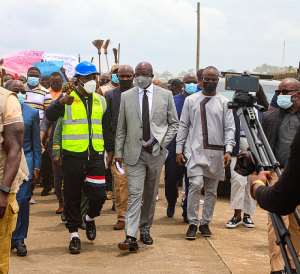 Residents of PHP Community and its environs, including Budget Bureau and Buzzi Quarter Communities, have been without a decent place to carry out their sporting activities aside from the historic Antoinette Tubman Stadium, leaving many of them to go to distant places to engage in competitive sporting activities.

The program held in the PHP Community on Thursday, August 5, 2021 followed the groundbreaking for the construction of a beach sports facility by H.E. Dr. George Weah, President of the Republic of Liberia.

Making remarks at the groundbreaking ceremony, Mayor Koijee appreciated the residents of PHP Community for their involvement in the construction of the recreational facility.

He reiterated the participation of residents of PHP, Buzzi Quarter and Budget Bureau Communities in the sporting tournament that was hosted by the City Government of Monrovia on Sunday, August 1, 2021.

The City Mayor recounted: “We were here with you few days with your involvement into sportsmanship. You were being very cordial; you exhibited high degree of morality, peace and unity”.

He informed President Weah of the enthusiasm and excitement of the residents of PHP Community toward the construction of the proposed recreational center.

“Mr. President, let me use this time to emphasize on the voices of our people particularly the immediate beneficiaries of the proposed PHP facility,” Mayor Koijee intimated, and added: “It has urged me to let you know that they are well pleased and excited that you have engaged in an initiative that will take people from Mamba Point to PHP”.

He indicated that the groundbreaking ceremony for the construction of a modern recreational facility under the administration of President Weah has brought fond contentment and dignity to the residents and people of PHP Community.

“Too often things are seen up Mamba Point and Sinkor. Under your leadership you are beginning to give them relevance and dignity”, Mayor Koijee lamented.

He used the occasion to thank President Weah for the installation of 250 new transformers in the PHP Community.

The Monrovia City Mayor, after the program, toured the PHP Community along the Redemption Road, where he made brief stop and interacted with Community dwellers as well as LEC workers who were executing duty.

The Recreational Facility is funded by the Government of Liberia and the United Arab Emirates, through the Abu Dhabi Fund for Development (ADFD).