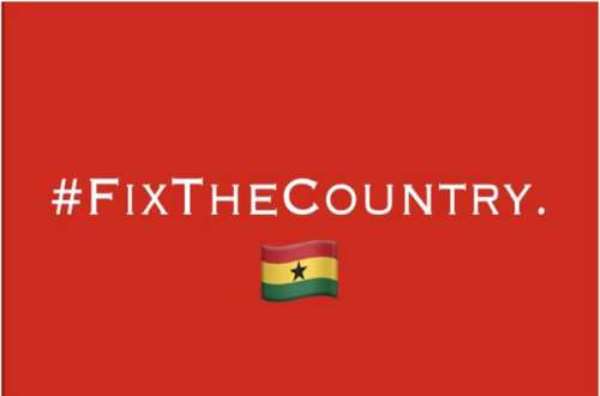 Fix the Country should not be viewed as a political platform created to attack the current government and the workings of institutions in the country currently. It should be seen as an innovative dais that can be used to seek the unfulfilled promises of the current government and politicians broadly. In that light, the campaigners should be appreciated as doing the bid of the masses who do not have the luxury of education, time and platforms for demanding proper management and accountability of state resources. There is real waste in the public sector and that accounts for the worrying situation of persistent leakages in Ghana.

It is never theoretically or practically wrong to remind people in government of the necessity to fulfill the promises made prior to elections. Fix the Country, to the extreme extent, is aimed at reigniting patriotism and the spirit of failed institutions to function to the advantage of the masses that form the state. It is a regulative mechanism to check the functioning of the government and some state institutions, and not necessarily to expose the fundament rots and weaknesses of the present government or administration.

It is evident in the districts and regions that some systems are completely broken that they need fixing. Road network systems are broken, political administrative systems are broken, the law enforcement machinery of the state is kaput, armed robbery is visibly carried out in the country, corruption is practiced with impunity while judgment debts, which were described as products of create, loot and share, have resurfaced more violently to disrupt proper allocation of resources in the country.

Road contracts have been awarded and these have not been executed. There are villages in Ghana that do not have properly-built feeder roads. The road linking Prang and Kintampo has been awarded severally where pieces of information concerning the award of contract can be found in the budget statements of the past governments and the present as well. There are evidence of abandoned schools and other projects. Some rural communities are abandoned only to be remembered during elections.

The conveners of Fix the Country may not have delivered the message unmistakably as they should, there is a legitimate call on the state to have a pensive discussion on its programmes and policies to the systemic challenges in the country.

The entire system put in place to maximize the use and benefits of resources is weakened by the selfish political interest of a few. These people are not only politicians but people who are in advantageous positions and decision-making units.