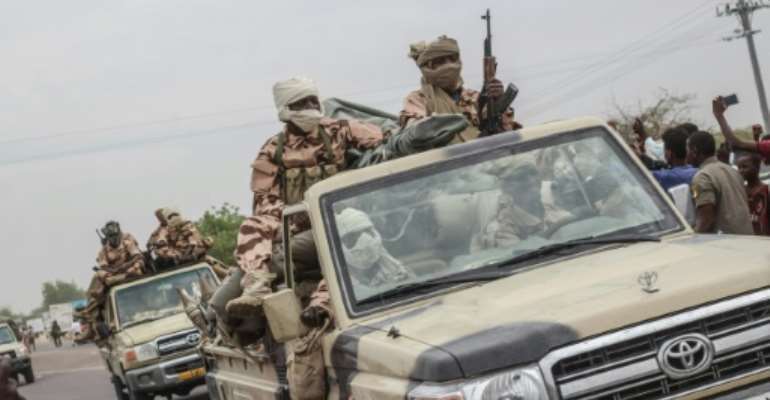 Chad's armed forces are facing attacks from rebels in the far north of the country and jihadist incursions from Nigeria in the southwest. By Djimet WICHE (AFP)

At least 26 Chadian soldiers were killed in an attack by jihadist fighters in the troubled Lake Chad region, a senior local official said on Thursday.

"Twenty-six members of the Chadian army fell on the field of honour, 14 others have been wounded, including eight seriously," the army's spokesman General Azem Bermandoa Agouna told AFP.

"Several terrorists were neutralised and clean-up operations continue," he added.

The region's deputy prefect, Haki Djiddi, told AFP earlier that 24 soldiers were killed on Wednesday when Boko Haram attacked them when they were resting after returning from patrol.

Mahamat Idriss Deby, president of the military transition council since his father died in April during fighting with rebels, said the stakes are high.

The soldiers' deaths "recall the security challenges we are still facing in a part of our borders," Deby said.

"The heavy toll that we pay in this asymmetric war is bitter but it will not be in vain," he said.

"We will make the terrorist hydra capitulate," he said.

Agouna said the attack had taken place at Tchoukou Telia, an island 190 kilometres (120 miles) northwest of the capital N'Djamena.

'Not a single jihadist anywhere'

Lake Chad is a vast area of water and marshland bordered by Niger, Nigeria and Cameroon as well as Chad.

Jihadists from Boko Haram and a rival splinter group, the Islamic State West Africa Province (ISWAP), have been using the region for years as a haven from which to attack troops and civilians.

The Chadian authorities tend to call the jihadists "Boko Haram" regardless of their affiliation.

In March 2020, around 100 Chadian troops were killed in an overnight attack on the lake's Bohoma peninsula, prompting an offensive the following month led by Chad's then president, Idriss Deby Itno.

After pursing the militants deep into Niger and Nigeria, Deby said there was "not a single jihadist anywhere" on the Chadian side of the lake region.

Attacks have continued, however.

In July, 11 Cameroonian troops and a civilian were killed in two attacks in Cameroon's Far North region, the tongue of land that lies between Chad to the east and Nigeria to the west.

Deby was killed in April 2021 during fighting against rebels in northern Chad and was succeeded by his son, Mahamat Idriss Deby Itno, at the head of a military junta.

Boko Haram launched a revolt in northern Nigeria in 2009 before extending its campaign into neighbouring countries.

According to UN figures, more than 36,000 people, most of them in Nigeria, have died and three million have fled their homes.

In 2016, Boko Haram split over its indiscriminate targeting of Muslim civilians and use of women suicide bombers.

Boko Haram said in June that its leader, Abubakar Shekau, had died in fighting with ISWAP, which claims allegiance to the Islamic State group.