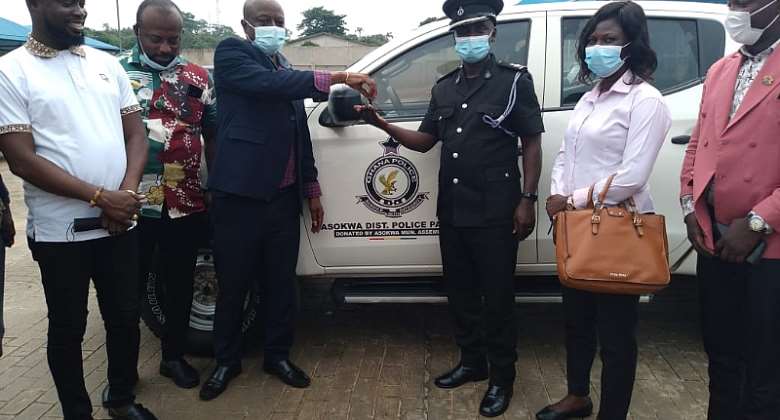 The Asokwa Municipal Assembly led by its Chief Executive, Chief Akwannuasah Gyimah has donated a Mitsubishi pickup to the Asokwa District Police Command.

The vehicle is to aid the Police in its patrol activities in the Municipality.

At a brief ceremony at the precincts of the Municipal Assembly Office, the MCE joined by staff and Assembly members handed over the vehicle to the Asokwa District Police Commander.

Chief Akwannuasah appealed to the command to ensure periodic maintenance of the vehicle to last long.

The Asokwa MCE in an interview said the Municipality has not seen serious armed robberies in recent times.

He however, noted that there have been cases where petty thefts have been reported in some areas of the Asokwa community.

The MCE said reports of persons pursuing some commuters on motorbikes have been reported to the Police with the latest happening three days ago at Ahensan Estate.

Based on these reports, Chief Akwannuasah said the Assembly together with the MP for the area, Madam Patricia Appiagyei deliberated and decided to support the District Police command with the vehicle to enable them curb such crimes.

The MCE advised the youth of the municipality to desist from crimes and violent behaviours.

He said the Police have been motivated to curb such tendencies including the smoking of marijuana.

Chief Akwannuasah said rather than engage in criminal activities the youth could take advantage of the skills training initiatives under the Youth Employment Agency (YEA) to learn a trade or profession.

He noted that the vehicle would aid the operation of Command including night and day time patrols in the Municipality.

He noted that the donation by the Asokwa Municipal Assembly is a timely intervention to fight crime.