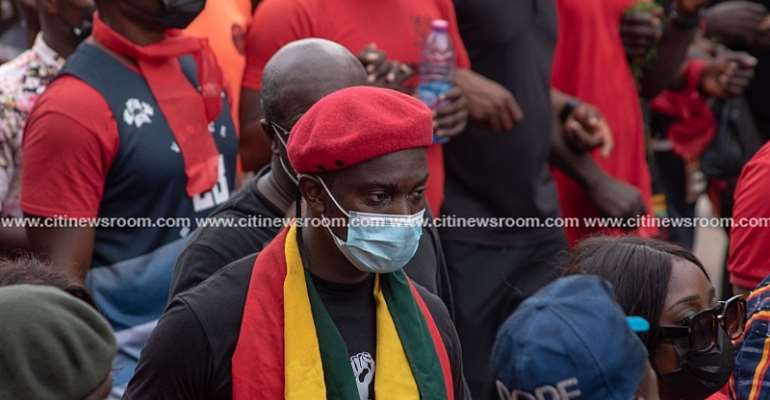 Convenors of the #FixTheCountry movement are gathering the signatures of one million Ghanaians for a petition to demand a new constitution for the country.

The social media campaigners are demanding what they say will be a fresh constitution intended to represent the hope and aspirations of Ghanaians.

Describing the existing 1992 constitution as undemocratic, the group makes the point that the document exists under the guise of constitutional rule, and it is simply a tool deliberately designed to unfairly rob the citizenry of their due.

“This constitution claims to be wanting to produce a democratic society. We all know that in a democratic society, everyone is equal before the law. You cannot have indemnity clauses buried in the Constitution yet, accept the equality of society when clearly there are some over and above the law. That is why we want a new constitution”, one of the #FixTheCountry campaigners, Ernesto Yeboah, said on the Citi Breakfast Show on Thursday.

Mr. Yeboah, who’s also the leader of the pressure group, the Economic Fighters League, was one of the protesters at the centre of the August 4, #FixTheCountry demonstration in Accra.

The protest saw thousands of Ghanaians converge on the Kwame Nkrumah interchange and walk through some streets of Accra. Draped in black, red and other national colours, the group sought to pile pressure on the government to ‘fix the country’s growing levels of social and economic hardship .

One of the major messages conveyed was the need for a new constitution, as participants of the much-patronized street protest held placards with wording such as, ‘Common sense over constitution’, 'A new constitution now', among other slogans.

The movement, according to Mr. Yeboah, has officially begun processes to create a petition for a new constitution, with the first step being the collation of signatures.

“Yesterday [Wednesday], what we did was to launch a campaign to gather one million signatures calling for the abolishing of the 1992 constitution and the institution of a new one that will represent our hope and aspirations and the kind of society and future we want to build for ourselves.”

“In fact, there was the establishment of a Constitutional Review Committee. We spent money on that process and when they finished with their work, that report is on the shelf gathering dust. They don’t feel accountable to anyone. No constitution can continue to exert legitimacy on a people that have represented it, and it is on that personal autonomy and individuality of our will that we are exerting that force on the political establishment”, he added.

Protests to be replicated nationwide

The demonstrators have been impressing upon the government to improve the standards of living of citizens and honour its promise of ensuring good governance.

Their protest, which started as #FixTheCountry on social media, was held after several weeks of social media mobilization amidst a legal tussle that nearly stopped the street protest.

In the meantime, the group has disclosed that similar protests will soon take place in other parts of the country.

The organizers say they are not going to rest until the country gets better, explaining that the plight of the ordinary Ghanaian is their sole reason for the protests.

Ernesto Yeboah has assured Ghanaians not to worry, adding that they are ready to put the leaders of the country on their toes .

“This is the beginning of more protests. We will be rolling out our plans for what next, and Ghanaians should be sure that every space in this country is going to have a taste of what has happened here in Accra.”

Gov’t in the process of buying bigger presidential jet – Eug...
9 minutes ago