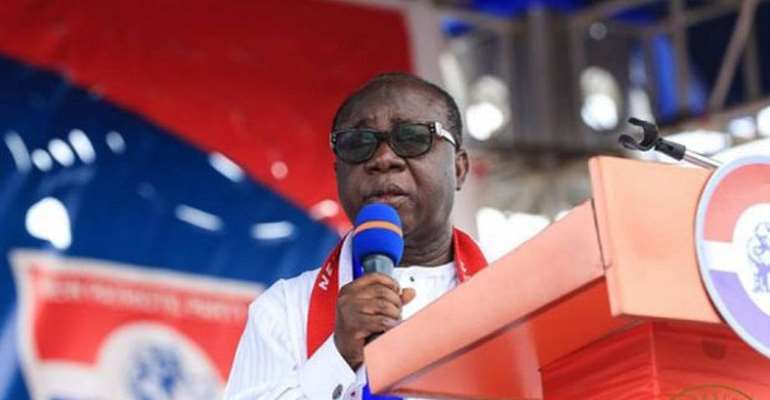 The National Chairman of the ruling New Patriotic Party (NPP) believes President Akufo-Addo is serving the country as expected of him, regardless of the challenges he faces.

While striving to “build a better Ghana,” Mr. Blay said Nana Akufo-Addo has been able to deliver on the promises he and the NPP made to Ghanaians in the face of unending criticisms he described as “ugly noises”.

Mr. Blay said this when he spoke at the New Patriotic Party's 29th-anniversary celebration held in Accra on Thursday, August 5, 2021.

The event was on the theme: “NPP at 29, a tradition for stability, prosperity and continuity”.

“The core value of the New Patriotic Party is commitment and dedication to public service. We must never forget what defines who we –which is the democratic ideals of serving in the interest of the people to build a better Ghana. And I believe this is what Nana Addo Dankwa Akufo-Addo is doing at the moment, irrespective of the ugly noises and sometimes direct confrontations… What will keep us in power and help us build a sustainable future is our dedication to delivering faithfully the promises we made to the people of this country,” he said.

Mr. Blay used the opportunity to encourage members of the NPP to prioritize the unity of the party to help achieve its objectives.

“I want to charge the members of the party to prioritize unity over parochial interest. This is the only way that we will still be on top of government and our contract with the people of Ghana in terms of its development.”

“This is the only party that can deliver that, and we must keep it so, and we must be very united irrespective of our own personal interest,” he said.

The New Patriotic Party was founded on 28th July 1992, with the aim of bringing together like-minded citizens of the country so that they may strive for Freedom and Justice and to contribute to the welfare, peace, and prosperity of Ghana.

The party has won four presidential elections since multi-party rule begun in Ghana in 1992.