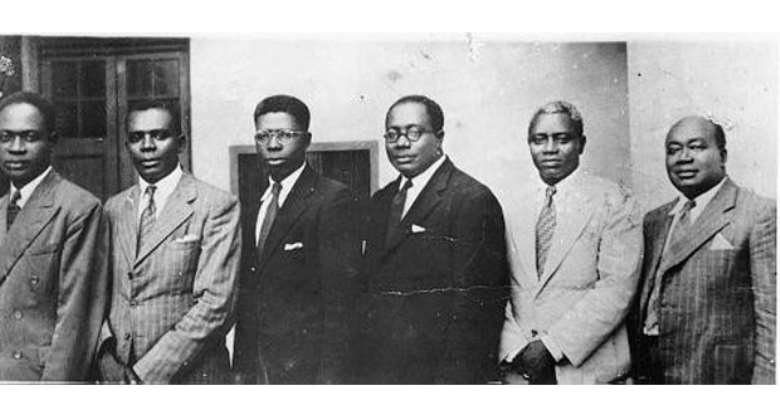 For reasons best known to them, some persons still hold on to their stance that this country was founded by one person.

The task of seeking the independence of a country is so herculean that it can only be achieved by concerted efforts of the populace.

Unfortunately those who savour political mischief and seek to twist the facts of history take wanton delight in presenting the story of Ghana with a twist in their bid to enhance their warped 'Founder's  Day'  and not 'Founders' Day' mentality.

The role of the 'Big Six' crucial as it was could not have yielded the fruits of independence if it had not been impacted by the efforts of sections of Gold Coasters.

Indeed they, 'Big Six', led the charge and coordinated the overall activities which led to the decision to set up the Coussey Commission. The flames of the struggle having been lit and the pressure ramped up, the colonial authorities had no option than to succumb to the demand and to actually expedite the journey to the momentous milestone.

For those who even stood against 'Self-Government Now' and preferred it in the 'Shortest Possible Time' all played crucial roles in the lowering of the Union Jack and the hoisting of the banner of the newly independent Black Star of Sub-Saharan Africa.

Even Dr. Kwame Nkrumah in some of his literary works pointed at the fact that he worked with people to attain the new status for our country. He might have denied the role of those who did not belong to his CPP, chroniclers of the journey to independence would demur and state otherwise.

For those who out of mischief or sheer ignorance about the history of this country and would seek to rewrite a contrary story, they must be ashamed of themselves.

The eventual feat was attributed to myriad factors including the Aborigines Rights Protection Society (ARPS) and the Osu Crossroads Shooting Incident among others. To ignore these footnotes in the quest for independence not forgetting our farmers and even market women is to display shameful mendacity.

We would not hesitate to ask that in future occasions we should as a nation organize symposia to present the true history and why there was the need for 'Founders' Day'.

There is no dearth of historians to deal veraciously with such a subject.

We are reminded about an inscription on a commercial commuter bus in Accra which reads 'Tell the children the truth.'  We could not agree more. If efforts are not taken to present these important facts about our history, the youth would be compelled to buy into the propaganda-driven tales about how this country came about.

When we allow diabolically-minded politicians to lead matters which are academic in nature, the outcome is the sort of befuddlement which has visited our history.