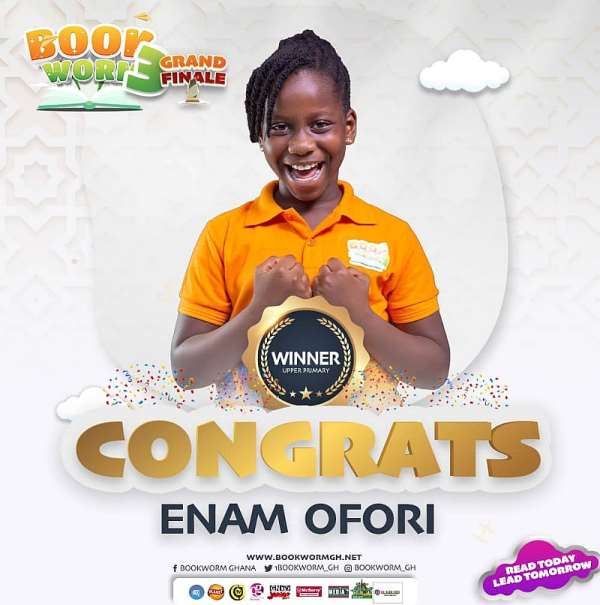 Teachers and pupils of Santa Barbara School and Alsyd Academy in Accra were thrown into a state of jubilation as their pupils emerged winners of the third season of Book Worm competition.

Not only their teachers and colleagues were thrown into the ecstatic mood but their parents and other relatives too.

The loved ones of the duo after intense physical, emotional and spiritual support through the contest could not control themselves singing victory and praise songs to honor God for the results of the four month long reading competition.

Earlier, the Chief Executive Officer of Bookworm Consult, Mr Nelson Kofi Poku, said the reading competition started in the heat of the COVID-19 pandemic when children were out of school.

“The competition started when I realized that all learning activities which engaged children at home were targeted at Junior High and Senior High School students while primary pupils were left out amid the pandemic,” he said.

Mr Poku noted that the competition was held in seasons, where each season lasted for four months; each season is made up of two categories which are the lower primary; one to three and upper primary four to six.

He stressed that out of over 100 forms sold out, a total of 55 students were selected to participate in the competition for season three out of which 15 made it to the finals.

Mr Poku indicated that Bookworm Consult was arranging to scale up the reading contest to the national level.

He announced that the next season for the Bookworm competition is slated for September to December 2021, encouraging parents to bring their children on board.

The competition is a televised reading and reality show, which allows children the opportunity to showcase their reading talent in a form of a competition, where winners are selected based on judge’s score and public votes.

It started in June 2020, aiming at inculcating the habit of reading and understanding into children

The patrons were full of gratitude to Bookworm Consult for such an Organisation. Urging them not to stop, they patrons joined them to call on government to invest more in books for primary schools to encourage the children to read.