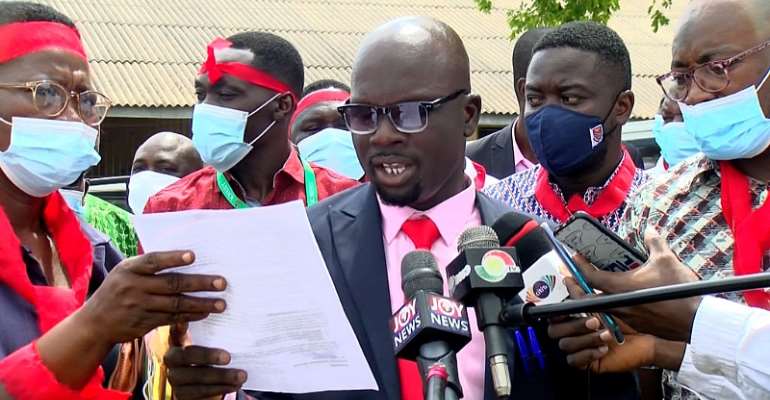 The Senior Staff Association of Public Universities of Ghana is doubtful its engagement with government over their grievances would yield any fruitful results.

The National Labor Commission (NLC) is set to engage the union today, Thursday, August 5, 2021, over their demand for better conditions of service which resulted in industrial action last Monday.

But in an interview with Citi News, the National President of the Senior Staff Association, Mohammed Zakaria, said the neutrality of the Commission has been compromised.

“We do not expect much because the Labour Commissioner himself has been on air talking about a lot of things that suggest that his neutrality has been compromised. This is purely the opinion of the rank and file of the Senior Staff Association”, he said.

The NLC, has directed the Senior Staff Association of Universities of Ghana, to call off their strike and appear before it .

In a letter to the union, the NLC directed the group to “stay any or all intended actions for the parties to appear before the Commission.”

The Executive Secretary of the National Labour Commission, NLC, Ofosu Asamoah, has urged the association to consider ongoing negotiations .

“By law, when you are negotiating or a case is before the commission, and it is being heard, you don't go on strike,” he said.

To address the concerns, the Deputy Minister for Employment and Labour Relations, Bright Wireko-Brobbey, has also said a committee will be set up to resolve the current impasse.

In the meantime, the Fair Wages and Salaries Commission (FWSC) has accused the Association of breaching the rules of engagement guiding ongoing negotiations on concerns raised by the association.

According to the Commission, the association was expected to return to the negotiation table on August 3, 2021, prior to declaring a strike on Monday.

The Head of Public Affairs at the Fair Wages and Salaries Commission, Earl Ankrah, said “to the best of our knowledge there is no problem. These issues that are out there in the public took us by surprise. We were supposed to be at the table negotiating.”

In a related development, the University Teachers Association of Ghana (UTAG) members are also on strike because they want the government to restore the conditions of service agreed upon with the government in 2012.