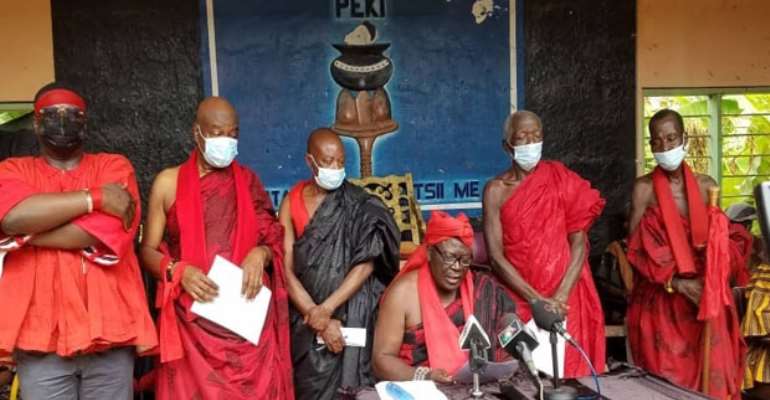 Paramount Chief of Peki Traditional Area, Deiga Kwadzo Dei, has warned against an alleged plan by the people of Tsito to install a chief for Dededo, a community within an area, which has been the subject of a long dispute between the two traditional areas.

He said the planned installation was in disrespect of the ongoing court case over the land, and had the tendency of derailing the peace that had prevailed for some time now.

The Paramount Chief who was addressing a press conference at Peki Blengo in the South Dayi District of the Volta region on Wednesday, therefore appealed to the government to consider the gravity of the emerging development, towards averting a possible reversion to the clashes between the two traditional areas.

“We the Chiefs and people of Peki have agreed to seek judicial determination of the case, to see that peace prevails in the area. This is why we are still in Court. But it has come to the notice of the Chiefs and the people of Peki that certain developments from our neighbours in Tsito give cause for alarm.

The Paramount Chief further alleged that the Chiefs and people of Tsito “unilaterally” ceded out portions of the disputed land for the installation of a telephone mast, royalty from which he claimed was being used to finance the court case.

He also claimed that a “large portion” of the land had been leased out by Tsito for cattle ranching with its attendant destruction of farms, while permitting sand winning, which he said also destroyed the land.

Deiga Dei said the infractions threatened the peaceful resilience of the people of Peki, and must be addressed as a matter of urgency.

“We want to draw the attention of the Nation, the authorities and everybody that, we the people of Peki have been able to hold our peace for all this while, by not acting in ways that will disturb the peace. We do not want any blame by going contrary to acceptable peaceful procedures. It is because of this that peace has prevailed for the outcome of the judicial process.

“We the chiefs and people of Peki take a serious view of the planned action of our counterparts of Tsito. We cannot sit down, fold our arms and look unconcerned for the installation and all the above mentioned activities to take place and continue.

“By this news conference we want to draw the attention of the whole world that the planned installation of a chief in the disputed area is unacceptable. We have maintained the peace; we have kept it for a long time. The action by the people of Tsito has gone over the bar and we cannot continue to tolerate it.

“But if the planned installation is not stopped, we cannot also look on unconcerned and can therefore not be blamed for the aftermath of whatever transpires in the place.

Dededo was established in 1961 by the Apostles Revelation Society (ARS), and eventually became a refuge for displaced communities following bloody clashes.

Deiga Dei said the last chief of Dededo who died over 36 years ago, was installed by the people of Peki in consultation with the settlers.

He said although a new chief was expected to be installed, it had been hindered by the court case as the people of Peki sought to abide by the law.

Present at the press conference were Chiefs of the various communities under the Peki Traditional Area, all who were dressed in mourning clothes.

The conference was held under strict supervision of the police who enforced the needed coronavirus protocols.

Also present was Rockson Dafeamekpor, Member of Parliament (MP) of South Dayi, who promised to bring up the issue in Parliament, to facilitate an end to the over 70 year-old dispute.

He also said the issue must be given the needed media attention, and promised to lead the effort while calling on the youth of the area to endeavour to prevent any clash with the people of Tsito.