Springboks, Lions with points to prove in Test series decider 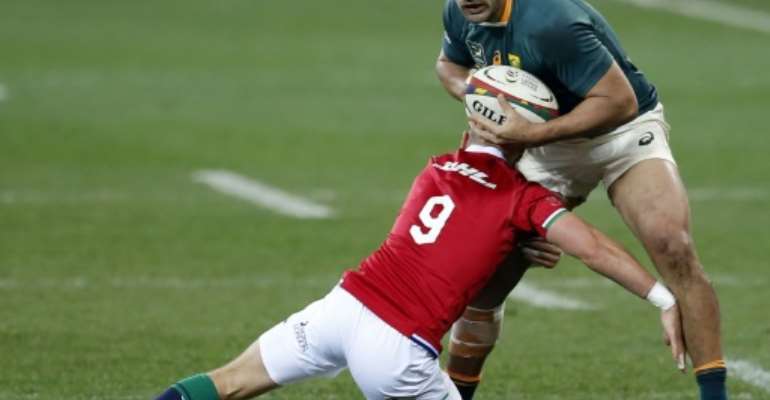 The Springboks and British and Irish Lions declared media lockdowns in South Africa on Wednesday with no access to either camp three days before the series decider in Cape Town.

After edging the first Test 22-17, the tourists suffered a 27-9 hammering last Saturday, leaving the hosts poised to become the first team to win a series between them after losing the opener.

While the 46 players chosen for the climax dodged the media glare, AFP Sport spotlights six with points to prove in an empty Cape Town Stadium this Saturday due to the coronavirus pandemic.

The Montpellier fly-half scored 17 points in the second Test -- surpassing by one point the Springbok record for a Test against the Lions which Keith Oxlee set 59 years ago.

This Saturday, he is poised to pass the 500-point mark in all Tests having scored six tries and kicked 79 conversions, 98 penalties and six drop goals for a total of 494.

Pollard has succeeded with 10 of 14 goal kicks in the current series and will have worked this week on solving the problem of missed attempts always drifting left.

Nothing would please the inside centre more than scoring a try on his 50th appearance for the green and gold after recovering from being burnt in a barbecue accident in Ireland two months ago.

An unsung Springbok hero because much of his defensive work goes unnoticed, the Munster back has averaged a try in every eight Test appearances.

"He has been a key figure in the team during the past few seasons and we are proud that he is set to reach 50 caps," head coach Jacques Nienaber said.

Anyone unsure what it means to wear the Springbok jersey should have listened this week to De Jager, the lock who makes his first start on Saturday.

"We disappointed ourselves, our coaches, and, above all, our country, in the first Test. Donning the green and gold is a massive privilege that can never be taken for granted," he told reporters.

De Jager will partner Eben Etzebeth in the second row with Franco Mostert moving to the back row in place of injured 2019 World Rugby Player of the Year Pieter-Steph du Toit.

No Lion would have been more relieved to survive the axe after the second Test than South Africa-born Scotland winger Van der Merwe.

Within minutes of the kick-off last Satuday, he was lucky to avoid a yellow card for a late tackle on Du Toit, inflicting an injury which has ruled the Springbok star out of the series decider.

Soon after he pleaded innocence after deliberately tripping Cheslin Kolbe and this time was sin-binned. Upon his return, the huge back made little impact.

The Wales prop was forced to pull out of the first Test at the last minute after injuring his shoulder while training.

He now starts in a loosehead position that has been problematic for the visitors with Rory Sutherland starting the first Test and Mako Vunipola the second.

Scarlets team-mate and hooker Ken Owens has also been promoted and the pair, along with tighthead Tadhg Furlong, will lock arms with Steven Kitshoff, Bongi Mbonambi and Frans Malherbe at scrum time.

It has been a topsy-turvy tour for the veteran Ireland scrum-half, who has gone from captaining the Lions to sitting on the bench this Saturday, waiting for the probable nod to come on in the second half.

Murray became skipper when Wales lock Alun Wyn Jones was ruled out by an eve-of-departure shoulder injury, from which he made a miraculous recovery, and reclaimed the squad leadership.

Scotland's Ali Price played so well in early tour matches that he made the first Test starting line-up with Murray among the replacements, and the roles were reversed for the second.

Alliance of CSO petitions Parliament for audience with GNPC ...
5 minutes ago