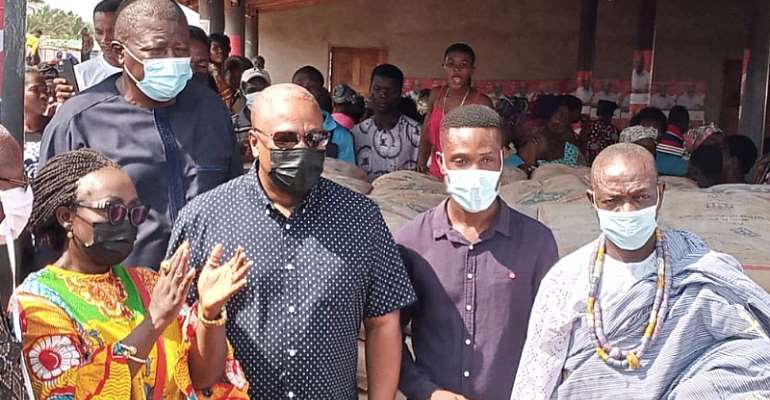 Former President John Dramani Mahama has supported tidal wave victims in Salakope, Agavedzi, Amutsinu and the surrounding towns in the Ketu South Municipality of the Volta Region with some relief items on Wednesday, August 4,2021.

The donations was as a result of the numerous pleads from the victims of the tidal waves who have been depending on the benevolence of the public to survive since the incident.

Mr Mahama pledged to support the victims as government is yet to construct sea defence walls to stop further destruction of properties and lives.

Mr Mahama said the NDC supported in the past by constructing a sea defence wall at Keta which they intended to extend same to cover the whole area but unfortunately lost power to the NPP.

He also applauded people of Volta Region for the massive support they gave him and NDC during the 2020 general elections.

"You did not disappoint me at all, you have demonstrated that Volta Region is our world bank, l really appreciate it," he stated.

He continued that," if Nana Addo led administration were to continue to the massive sea defence project NDC has started, people of the area would not have been displaced."

He again assured them of a strong come back in 2024 and encouraged them to be more faithful to the party.

Madam Dzifa Gomashie, Member of Parliament for Ketu South Constituency in her speech expressed excitement and thanked the former President for the kind gesture.

She also expressed disappointment in the Akufo-Addo's governments for delaying the construction of sea defence wall to avert any further destruction.

Mr Aben Asar, the Assemblymember for the area interview with ModernGhana news expressed his gratitude to the former President for the kind gestures.

"Our properties were totally destroyed by the tidal waves which made the whole situation worse," he mentioned.

He appealed to the government to as a matter of urgency construct the sea defence walls as the surest way to save lives and properties.

The former President was however accompanied by Volta NDC parliamentary caucus. Present at the occasion were some chiefs and elders of the area, Assembly members, heads of institutions and supporters of NDC.