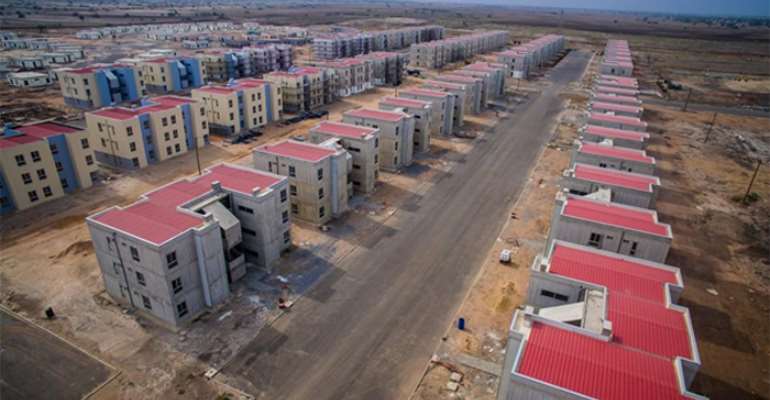 Some of us are over the moon on the Attorney General and the Minister of Justice’s conscious and forward-thinking decision to arraign some suspects in the botched Saglemi housing project before a competent court of jurisdiction.

In retrospect, in 2012, the Parliament of Ghana duly approved a loan of 200 million United States dollars, an equivalent of 1.2 billion Ghana cedis to build 5000 affordable housing units.

Regrettably, however, the erstwhile Mahama administration strangely readjusted the original contract on the blind side of the Parliament of Ghana and initially reduced the housing units to 1502 and further reduced to 1412.

What is more bizarre is that the outgone Mahama administration ridiculously used the 200 million United States dollars to build only 668 housing units.

In fact, the Saglemi scandal is not an isolated incident. Somewhere in 2009, the Mills/Mahama administration promised that a certain STX Housing deal was going to provide about 200,000 affordable housing units to the country’s security agencies at an estimated cost of $10 billion.

However, due to the unpardonable negligence on the part of Mills/Mahama administration and the boardroom tussle between the project supervisors– STX Korea and GKA Airports Company Limited (STX Ghana), the deal unfortunately hit a dead-end.

Subsequently, President Mills had this to say during a press conference: “we have some difficulties with the STX project and as a president I am eating a humble pie to say that we are looking for alternatives.”

Somehow, it was later reported that Ghana had allegedly lost a staggering $300 million in spite of the fact that the deal did not materialise.

Interestingly, however, sources had it that at all material times, it was the then vice president, John Dramani Mahama’s office that handled issues concerning the STX Housing deal.

Strangely though, President Mills of blessed memory seemed apocalyptic about the whole deal, judging from his state of the nation address in 2010, when he had this to say: “the Vice President had travelled to Seoul, Korea, to nail the coffin' of STX.”

We can, recollect, albeit with extreme sadness, that although the STX Housing loan agreement which was supposed to provide affordable housing units to the security agencies did not materialise, and yet the then vice president, John Dramani Mahama, is alleged to have given us a bill in excess of $300 million. How strange?

In a related development, after the failed deal with STX to build 200,000 housing units for the nation's security agencies, the NDC government entered into another deal with the GUMA Group for the construction of 500 housing units.

The deal which was alleged to have negotiated by the then vice president, John Dramani Mahama, was widely criticised by various stakeholders, just as the STX deal, following the decision to side-line local construction firms in favour of the foreign company. The unusually high cost of the project was also a source of concern to many.

Some observers thus believe that it was due to the countless dubious agreements which made Ghana’s debt ballooned from an arguable meagre GH9.5 billion in 2009 to an incredible GH122.4 billion by December 2016 with a little to show for.

Dearest reader, tell me, if the rampant bribery and corruption, dubious judgment debt payments, stashing of national funds by some greedy opportunists , misappropriation of resources and crude embezzlement of funds meant to provide developmental projects by some public officials do not warrant criminal charges, then where are we heading as a nation?

The crucial question we should be asking is: will the day come when “Ghana’s political criminals” find they have nowhere to hide?

How serious are we as a nation when we can only descend heavily on the mobile phone, the goat, cassava and plantain thieves, and let go the hardened criminals who persistently dip their hands into the national coffers?

Since we share in the well-meaning Ghanaians apprehension over the seeming lack of prosecutions in alleged bribery and corruption cases, we can only invoke our instinct for tact and diplomacy while we wait patiently for the institutions that have the mandate to investigate and prosecute corruption suspects to do so democratically.

Notwithstanding the corrosive effects of corruption, it will be unthinkable for anyone to suggest that corruption can be circumscribed completely from the surface of this planet, let alone in Ghana.

Corruption is, indeed, a human foible and therefore we are likely to find some people disgustingly indulging in it.

While it is not so easy to stop other criminals from committing heinous crimes, it is also difficult for any leader to stop ravenous individuals from indulging in corrupt practices.

However, what any serious, committed and forward thinking leader could do is to seek to apply the existing laws as strictly as possible.

It is, therefore, worthy of note that exposure, prevention and deterrence are the useful tools for combating the canker of corruption.

The fact remains that Ghanaians are not distant apart in attitudes and behaviours from other human beings elsewhere, because we are all susceptible to human foibles.

But what makes the people elsewhere much more responsible than a Ghanaian is the rigidity of their state institutions and the effective laws and regulations.

Take, for example, elsewhere, the laws and regulations are strictly enforced, and as such the vast majority of the citizens and denizens prefer the observance to the stringent fines and the harsh punishments.

Disappointingly, however, during the erstwhile NDC administration, officials and their minions dipped their hands into the national coffers as if there was no tomorrow and went scot free.

In fact, the unbridled corruption in the erstwhile NDC administration which resulted in economic collapse is still fresh in the memories of discerning Ghanaians, and no real patriot will shrill and thrill over the return of the NDC.

The harsh economic conditions which the NDC government wilfully imposed on Ghanaians as a result of corruption will indeed take a long time to obliterate from memories.