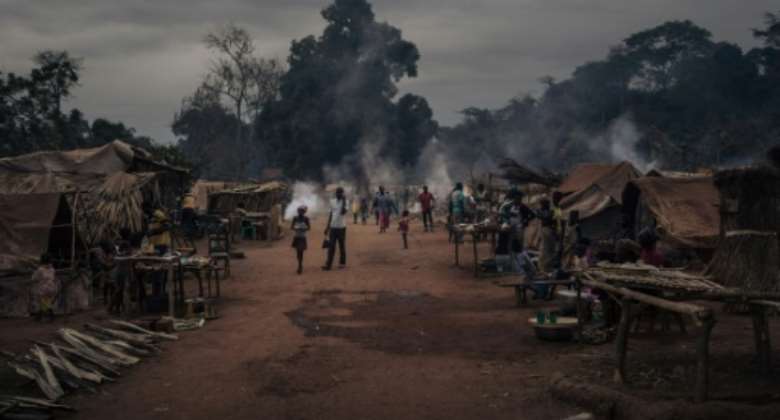 Refugees from the CAR city of Bangassou fled to Ndu in neighbouring DR Congo after a rebel offensive in January. By ALEXIS HUGUET (AFP)

Violence by rebel and government forces and their allies in Central African Republic has claimed more than 1,200 lives in the past year, the UN said Wednesday, describing the scale of bloodshed and abuse as "alarming."

Many more victims could not be identified.

The rights section of the UN mission in the country, MINUSCA, "recorded 526 incidents of abuses and violations of human rights and international humanitarian law across the country," it said in a statement.

Documented abuses over the past year included "extrajudicial and summary killings, torture and ill-treatment, arbitrary arrests and detentions... conflict-related sexual violence and serious violations against children," it said.

A coalition of armed groups, the Coalition of Patriots for Change (CPC), was responsible for over half of the documented incidents, the report said.

The CPC, created in late 2020, brings together several armed groups controlling large parts of the country and determined to topple the government in Bangui.

"The CPC killed and abducted civilians, attacked UN peacekeepers (and) looted the premises of humanitarian organisations," the UN said.

But it also lambasted regular army forces and their Russian allies -- nominally "military instructors" -- saying they were responsible for 46 percent of the incidents detailed.

The report called on all parties in the conflict to cease attacks on civilians and demanded full and impartial investigation into crimes.

The CAR government did not immediately reply to an AFP request for a response.

Since December last year, government forces have managed to wrest some of the vast swathes of territory from rebel control, with the help of hundreds of Rwandan soldiers and the support of Russian paramilitaries.

The CAR is the second poorest country in the world, according to UN figures, and since 2013 has been ravaged by a civil war, even if the intensity of the fighting has fallen off since 2018.

An uptick in rebel attcks has been seen in recent weeks.