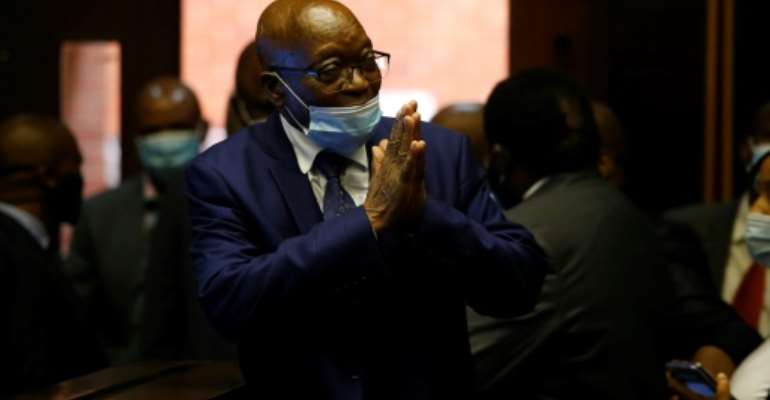 Zuma greeting supporters in the gallery of the High Court in Pietermaritzburg in May. By ROGAN WARD (POOL/AFP)

South African ex-president Jacob Zuma will be let out of jail next week to attend a long-running corruption case in person rather than by video link, a judge ruled Wednesday.

The hearing, scheduled to resume in the southeastern city of Pietermaritzburg on August 10, "shall proceed in an open court," Judge Piet Koen said.

Zuma, 79, last month began a 15-month jail term in an unrelated case, an event that sparked violence and looting.

He shortly afterward appeared for the corruption trial via video link, although his lawyers complained the online format was unconstitutional and breached his right to face-to-face consultation with his lawyers.

Zuma faces 16 charges of fraud, graft and racketeering related to the 1999 purchase of fighter jets, patrol boats and equipment from five European arms firms when he was deputy president.

Next week's hearing will start off with Zuma's application to have the state's chief prosecutor, Billy Downer, recused from the case on allegations of bias and leaking information to the media.

Zuma's Foundation welcomed the decision to have the case heard in an open court and tweeted "Now Mr Downer, will be processed properly".

During the last sitting, Wim Trengove, an attorney representing the national prosecution, rejected requests for Downer's recusal as "merely a ruse" aimed at further delaying the case.

Proceedings have repeatedly postponed for more than a decade as Zuma fights a rearguard action to have the charges dropped.

In the other case, Zuma last month was ordered to serve a 15-month term for refusing to testify to a commission probing state corruption under his 2009-19 presidency.

He started serving the sentence on July 8 at Estcourt prison, around 100 kilometres (60 miles) from Pietermaritzburg. Two weeks later, he was allowed to leave prison to attend his brother's funeral.