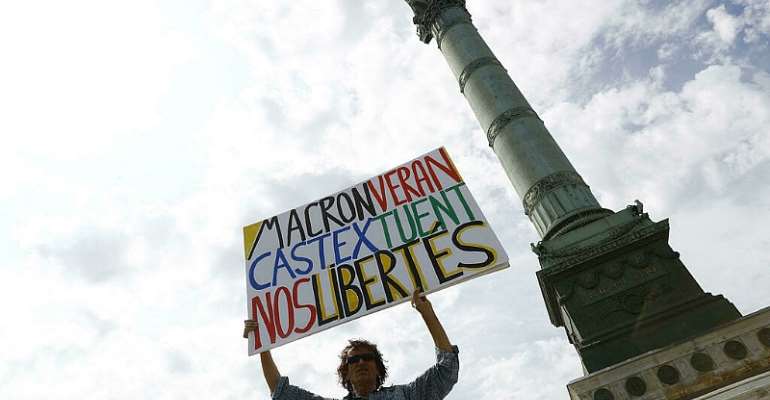 Weekend demonstrations against the French government's health pass have pushed the President Emmanuel Macron and Prime Minister Jean Castex to go on the offensive by condeming violence while also trying to promote vaccinations, as a 4th wave of the Covid epidemic engulfs the country.

According to the interior ministry, there were more than 200,000 demonstrators across France on Saturday protesting against the health pass with rallies often leading to outrage and sometimes violence.

Since then, the president has been looking to strike a balance between marginalising the most radical opponents and educating the undecided.

Meanwhile, speaking to RFI, Secretary of State for European Affairs Clément Beaune said: "It is important not to give excessive importance to a violent minority", while acknowledging that "there are anxieties about the vaccine itself; about how the start of the new school year will go; about the implementation of the health pass. We have to explain that," he said.

The government, led by Prime Minister Jean Castex, is fearful that the protest movement is gathering momentum, as the weekly demonstrations continue to grow each weekend, attacking President Macron with increasing vehemence.

Both Castex and Macron want to avoid the movement evolving into a Yellow Vest-style campaign that dogged the governement with violent protests from 2018 to 2020.

This comes as France's Constitutional Council is due to give a decision this Thursday on the law extending the health pass to bars, restaurants and trains.

In a bid to influence the decision of the Council, a lawyers' collective "DejaVu.legal" announced on Monday that it had filed a brief on behalf of 50,000 citizens that denounces the "disproportionate nature of the infringements caused to individual freedoms" by the health pass.

The Prime Minister's entourage say they "understand that there may be concerns" but they want to believe that "the real-life test of the health pass will convince most of those who are undecided and doubtful", referring to the mistrust that was expressed when travel certificates were introduced.

On Saturday night, clashes between demonstrators and police broke out in the French overseas territory of Martinique, during which a vaccination centre was set on fire by the crowd.

The Caribbean island re-entered lockdown last weekend having registered the highest incidence rate in the country of more than 1,000 cases per 100,000 inhabitants, yet one of the lowest vaccination rates of the French population at only 15%.