Asylum Down Pastor joins #FixTheCountry demo over low tithes, offerings in his church 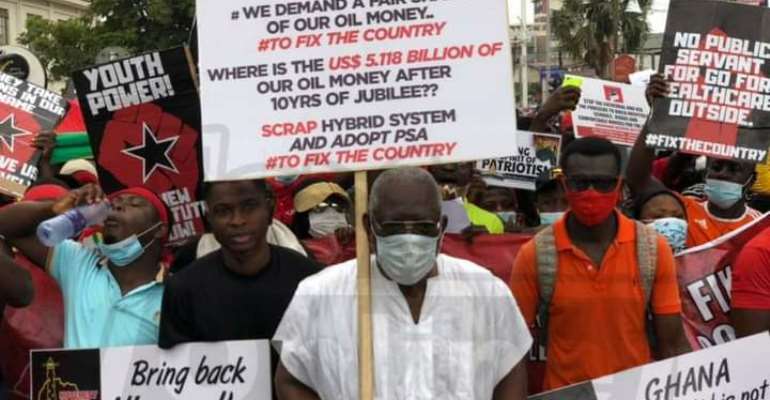 Apostle Dr. Daniel Adjei, Head pastor of Evangelical Methodist Church, Joshua Kwame Ampadu Cathedral, Asylum Down has indicated that he personally joined the #FixTheCountry demonstration because ‘my church collection and tithes have reduced’.

According to the Apostle, who looked very frustrated while speaking on camera “Nowadays when our church members come to church, they can't give offering. They can't pay their tithes because all our members are broke. There are no jobs in this country. That is why I have joined this demonstration”.

On Wednesday, thousands of demonstrators bussed from all parts of the country on Founder’s Day hit the Principal streets of Accra with the intentions of mounting pressure on the Nana Akufo-Addo government to create more jobs under the social media hashtag #FixTheCountry.

The Protestors, led by some disappointed media personalities, and celebrities among the youth were clad in black and red attires blowing vuvuzelas amidst the chanting of patriotic and war songs as early as 7am when they stormed the venue to commence the demonstration against the ruling government.

Earlier, the Police advised the protestors to respect all directives by the police during the march to ensure a smooth exercise.

They urged them to adhere to all COVID-19 safety protocols – wearing face masks, ensuring social distancing, and avoiding handshakes.

But they totally disregarded the social distancing protocols in the over three-kilometer walk demonstration from the Obra Spot at the Kwame Nkrumah Circle as they carried placards with inscriptions such as: “Honesty will make Ghana heaven”, “Corruption breeds poverty”, “Turn all prisons into hotels and put prisoners on state farms”, “Stop tribal discrimination”, “Fix our education system now” among others.

The much talked about the street protest on Wednesday starting from the Obra Spot through the principal streets of Kwame Nkrumah Avenue, Farisco, TUC, Kimbu, the Economic and Organised Crime Office (EOCO), through the Atta Mills Highway, and end at the Black Star Square.

#FixTheCountry is a hashtag being used by a group of independent, non-political Ghanaians, the middle class, and some celebrities with a call on the government for urgent social and economic reforms in the country.

The campaign started on Tuesday, May 4, 2021, after thousands of Ghanaians on social media, specifically on Twitter, got hooked up to the hashtag #FixTheCountry to protest poor governance and challenges in the Ghanaian economy.

Within 24 hours after the hashtag started the online campaign spread and gained nationwide attention promoting calls for street protests.

Leaders of the protest chose Sunday, May 9, 2021, for the demonstration but the police, on Thursday, May 6, obtained a restraining order from the High Court, presided over by Justice Ruby Aryeetey, against the protest march until the restriction on public gathering was lifted.

However, a Supreme Court Panel, presided over by Justice Yaw Appau, later set aside the High Court order that barred the protest indefinitely saying the order was in error and proceeded to quash it.

But they were later given the green light to hit the streets.