Tension in Zambia ahead of tightly-fought vote

By Obert SIMWANZA with Sofia CHRISTENSEN in Johannesburg 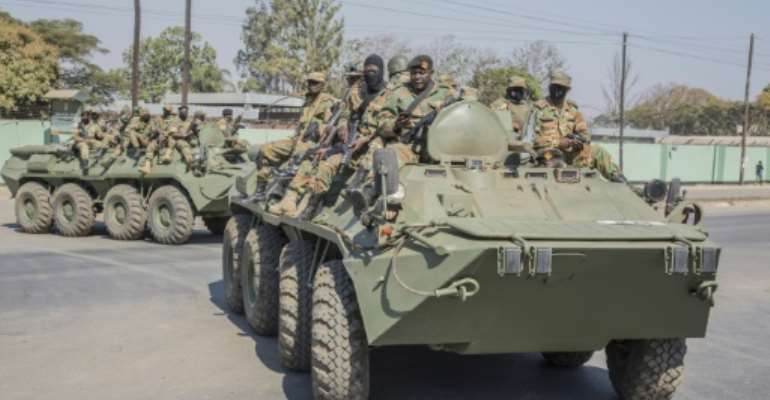 Military: Armoured personnel carriers on the streets of Lusaka on Tuesday. By SALIM DAWOOD (AFP)

Tension is rising in Zambia ahead of presidential elections next week, prompting an unprecedented deployment of the military to clamp down on violence.

The August 12 ballot is essentially a two-horse race between longstanding adversaries -- President Edgar Lungu, 64, and Hakainde Hichilema, 59, who is making his sixth bid for the top job.

Rival supporters wielding axes and machetes have clashed sporadically since campaigning started in May, resulting in at least three deaths, according to police.

All the fatalities were members of the ruling Patriotic Front (PF).

After two were clubbed to death at the weekend, Lungu sent in the army to help the police maintain "law and order".

"I have taken this step in order to ensure that the electoral process... is not interfered with," he said in a statement on Sunday.

But the move sparked concern of heavy-handedness.

"Lungu wants something that can tip the balance in his favour and a heavy military presence is likely to do that."

Violence has mainly been concentrated around Lusaka, traditionally a Lungu stronghold, and in the Northern and Northwestern provinces -- respectively bastions of the PF and the largest opposition group, the United Party for National Development (UPND).

Nicole Beardsworth, a politics lecturer at South Africa's University of the Witwatersrand, said the the race was "exceptionally tight" and more unrest was likely.

Analysts are divided on the poll's outcome.

Lungu emerged narrow victor over Hichilema in snap presidential elections in 2015 and in general polls the following year.

But rising food prices and unemployment have fuelled disillusionment with him.

Critics accuse him of splurging on pricey infrastructure projects and plunging the copper-rich country into Africa's first debt default of the coronavirus era.

"I can't support thieves, we have suffered because of them," said Lusaka resident Josephine Nakazwe, 23, selling cellphone credit outside a shopping centre.

A late 2020 survey by independent pollster Afrobarometer found a significant drop in the number of PF voters compared to a similar study in 2017, although this did not translate into a surge of support for the UPND.

Rights groups say Lungu's government has grown increasingly intolerant of dissent, detaining opposition figures and cracking down on protests, and darkening the prospects for a credible vote.

"This is the first time government is deploying soldiers to police the electoral process," said University of Zambia fellow O'Brien Kaaba.

"Should the election be disputed and should there be protests, the president may not hesitate to order the use of military force," he warned.

Zambia is no stranger to pre-election violence. Similar clashes occurred in 2016, although no deaths were reported, and the opposition disputed the results.

To protect themselves from being targeted by their rivals, opposition supporters are known to wear the green regalia of the PF rather instead of their own red colours -- a ruse commonly referred to here as the "water melon trick".

"I'm wearing this because I'm scared of being beaten by the PF," said Amos Mwale, 18, out in Lusaka in a white T-shirt with Lungu's portrait printed on the front. But "come voting day we are removing them out of power," he insisted.

Several UPND events have been blocked and dispersed with teargas for allegedly flouting coronavirus restrictions, prompting party officials to claim the police is under orders to sabotage their work.

Only door-to-door campaigning is authorised due to the pandemic, although large crowds have been spotted at "mask distributions" led by both sides.

The regime has "run out of credibility and support from the people," UPND spokesman Anthony Bwalya told AFP. "They are deploying brutal tactics to silence the opposition."

"These state security forces do play into politics," said Zaynab Mohamed of a consultancy firm, Oxford Economics. "They are highly politicised."

Elections will be held the same day for the single-chamber legislature, the National Assembly.

In the 2016 legislative elections, the PF had a wafer-thin majority over the UNPD, with less than half a percentage point in terms of votes cast.

But the party was able to gain an overall majority of the 156 contested seats under a first-past-the-post electoral system.