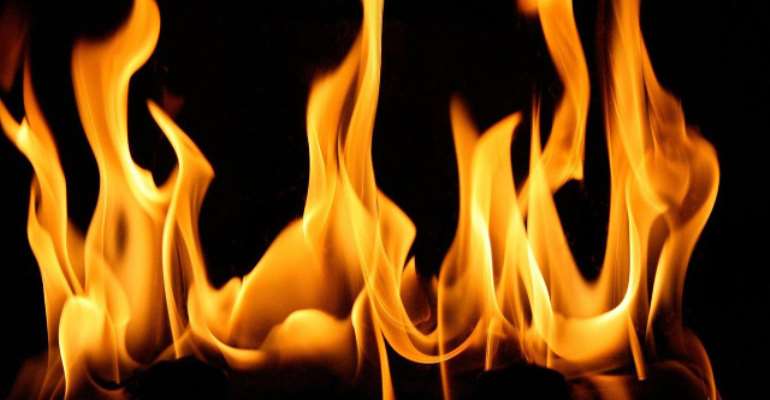 A 34-year-old man, Harry Amponsah suspected to be mentally deranged has set himself ablaze to prevent arrest after inflicting knife wounds on his father at Santa Maria, a suburb of Accra.

The fire was quenched and Harry was rushed to the Police Hospital for treatment but unfortunately, he died later on Tuesday.

According to Head of Public Affairs Unit of the Accra Regional Police Command, Deputy Superintendent of Police (DSP) Effia Tenge, the Odorkor Police received a complaint from the father of the suspect on Saturday, July 31, 2021.

She said the complaint was that his son Harry had attacked him with a cutlass and inflicted wounds on his left arm.

She said on Tuesday, August 3, 2021, the complainant led Police to his house at Santa Maria to arrest his son after returning from the hospital where he was receiving treatment.

However, the suspect upon seeing the Police, quickly entered his room and locked the door.

DSP Tenge said whilst in his room, Police suddenly saw smoke emanating from the suspect's room.

She said when the door was forcibly opened, the suspect was found on his bed in flames of fire and a deep knife wound in his stomach.

The fire was quenched and he was rushed to the Police Hospital for treatment where he died.