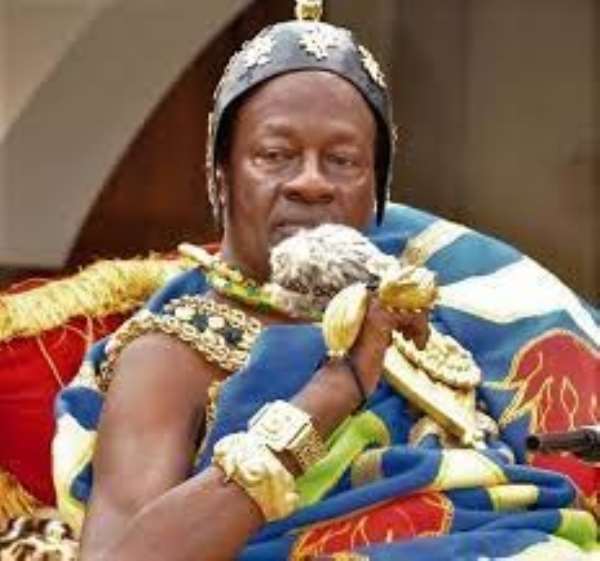 There was drama at the Yiadom Hwedie Palace of the New Juaben Traditional Council, Koforidua, the Eastern Regional capital over the weekend when sub-chiefs of the paramountcy were forced by the Omanhene, Daasebre Oti Boateng to invoke a curse on themselves over the GHC2000 bribe allegation tag against him.

This follows an allegation made against Daasebre Oti Boateng that he took a bribe of GHC2000 and two schnapps from the bereaved family of Suhyenhene before welcoming the family and Suhyen traditional council to officially inform him about the death of the Chief.

The Omanhene heckled his subjects over the allegation, noting that Suhyen's stool was in customary captivity, adding that the chief was suspended but he has given up everything.

The angry chief got upset and verbally accused some of the sub-chiefs of spreading the baseless allegation to tarnish his image.

Daasebre Oti Boateng angrily blasted the Chief of Suhyen, Okoawia Dwumoh Baabu II when he said the statement by the Omanhene was hearsay that he has not been able to point out the person he claimed was spreading the falsehood.

The Omanhene through his powers forced the sub-chiefs to drink from “Abonsam Buoso “which traditionally symbolizes a curse and bad omen to befall anyone guilty.

Earlier during the meeting, four armed policemen stormed the palace when tension broke out between the two factions around the Suhyen Stool, following the death of Suhyenhene when the determination was made for the appointment of acting Chief for Suhyen which is the Mponua Division of the traditional council.

The decision to appoint Gyaasehene of New Juaben Traditional area Nana Twumasi Darkwa as caretaker for the Suhyen stool follows the death of Suhyenhene Okogyeaman Ankama Basapong who passed on over a month ago.

The decision was very crucial as speculations were rife that, the regent could be given to the Chief Executive of Kama group, Dr. Michael Agyekum Addo who is Nkabomhene of New Juaben, a decision a faction was seriously opposed to on the basis that he could manipulate the stool to the rival faction.

Daasebre Oti Boateng directed that all stool-related and customary issues on Suhyen be directed to the Gyaasehene.

He admonished the Queen-mother to work in harmony with the Gyaasehene until a substantive Chief is properly nominated, elected, and enstooled.

However, the Krontihene of New Juaben, Nana Barfuor Nyantakyi Tutu Boateng in reaction, described the appointment of the Gyaasehene as caretaker Chief of Suhyen as traditionally wrong.

He stressed that the Queen-mother and Akwamuhene of Suhyen are the customary rightful persons to manage the affairs of the stool until a substantive Chief enstooled.

The Krontihene noted that the action by the Omanhene was shameful and disrespectful to the sub-chiefs.

According to him “Forcing Nananom present at today's Traditional Council meeting to drink in turns, portions of schnapps which was offered in libation on the “Abonsam Buoso” is a primitive method of determining Nananom's guilt or innocence of divulging information''.

He added that this is a criminal practice in the laws of Ghana. Unfortunately, I am told, all Nananom present allowed themselves to be treated in this inhumane manner. What a shame!!! Oh NJTC”.