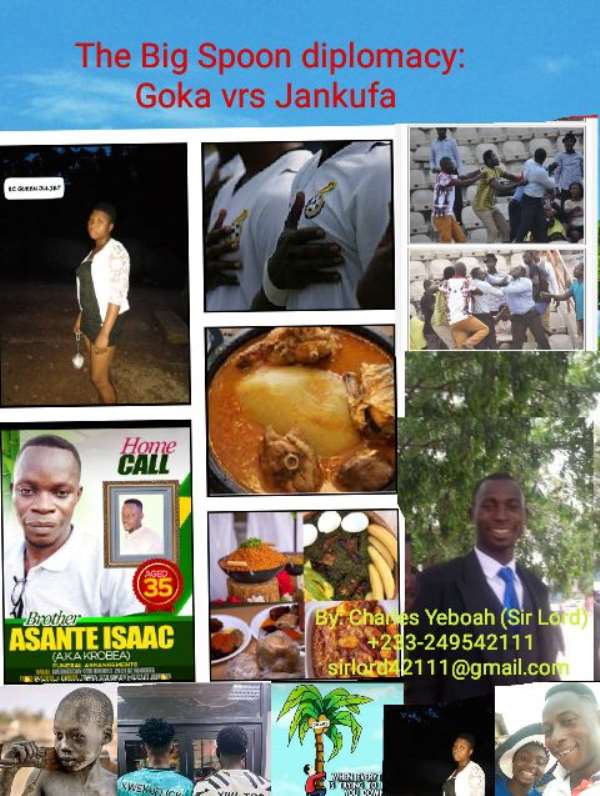 As in direct opposite to that of the reggae icon, Culture (Joseph Hill's) narration of the "Ladies that decided to make a big war with their Big Spoon" in his Tribal War hit, a Queen in contemporary times has brought two rivals together with her Big Spoon.

Goka and Jankufa were twin towns, and had only the river Wrɛwrɛ to separate them. The indigenes of the two towns intermarried and raised kids together. And students from either side of the river Wrɛwrɛ crossed paths to school daily - from Jankufa to Goka, and vice versa. It was also same plots of land that they shared for farming. So it seemed there was nothing that brought an enmity between the named two twin towns.

But it'll be a mistake to think so. Because Goka and Jankufa never played a violence-free football match.

In the whole of Bono region of Ghana, it is with little doubt to claim these two towns possesses the best of quality football players. And in every encounter, none was ready to play a second fiddle, safe a win, even if it was played without for a trophy, the bragging rights alone was enough to promise a fierce and combative match.

Then again, the host team is likely to give a sound beatings to the visiting team if they're bent on carrying away the points at stake in front of the partisan home supporters.

And as some people are born to be game changers and history makers, a naturally born Queen, Juliet of Jankufa will forever be credited for making meaning of a "friendly match" the Goka and Jankufa will continue to enjoy.

It came to pass that after a reprieve was given by Ghana's head of state, Nana Addo, in one of his Covid-19 broadcasts, otherwise known as "Fellow Ghanaians" on restrictions to socialisation in stemming the infectious lethal disease, Jankufa Eleven hosted Goka Stars in a friendly match.

What was at stake to battle for was no a crown than the usual bragging rights of who is the football supreme. And two minutes or less it seemed into the commencement of the game, the host Jankufa had their noses in front upon capitalising on a defensive blunder by the Goka stars.

And to bring it across, this particular friendly match had the prince of Goka himself in attendance, and the famous Krobea of Jankufa was also seen seriously supporting the home team.

Little wonder though did it come to light that the Goka Prince was in attendance upon the invitation of the Queen Juliet. And before the football encounter, the beautiful Queen had promised the Goka Prince a taste of cuisine that will last days in his mouth.

So, as the Goka Prince cheered the Goka lads to draw parity and a possibly triumph in the end, he knew his yelling will have something in the stomach to appease for.

And indeed, the lead striker of the Goka stars rifled a ball from just outside the centre circle into the yawning net of the Jankufa goal posts, misplacing the goal keeper.

Come and see jubilations. Even the supporters of the home team were of all applause for the beauty of the goal.

That equalizer broke the spirits of the Jankufa team, and right after the restart, the same dangerous Goka forward man intercepted a bad pass from the last defender of the home team, and he dribbled the on rushing goal keeper, kicking the ball through his opened legs, and it was a second goal.

The inability of the Jankufa team to accept a defeat from the Goka stars reared its ugly head, and the home fans rushed on the visiting players and their supporters, with the Goka Prince even nearly attacked but for the guards that shielded him.

Agya Krobea entered the field to calm down the home fans, but his words had a little change in the insane sour Jankufa losers.

The beautiful Queen Juliet was placed a call to on the ugly happenings on the field. And fearing her Prince could be harmed, she forebode her chores and hurried to the field, not noticing she still had in her hand the Big Spoon or ladle.

As the saying goes, a hungry man is always an angry man, and with the Big Spoon in her hand, with the sweet aroma of the soup, the angry mob gave ears to the pleading of the Queen Juliet, and she told them her mission there was to invite them home for a dinner, hence the Big Spoon she clutches.

Case closed. And in the company of the Goka Prince, Agya Krobea and both players and supporters of the two teams, a peaceful procession was made to Queen Juliet's dinner table where there was served all mouthwatering Ghanaian cuisines, from fufu to jollof . And after emptying the tables to their full, an unbreakable bond existed between Goka and Jankufa in all football encounters up till today.

It's rather unfortunate that, days after the game, Agya Krobea wouldn't live many more days, he fell ill, and passed on to the ancestors.

But when the history of Goka and Jankufa is written again, it wouldn't be only that of Queen Juliet's Big Spoon that'll be celebrated, but the part played also by Agya Krobea whose remains will be interred on the 4th of August, 2021, at his nativity, Jankufa.

Rest In Peace (RIP), Agya Krobea, you were a peacemaker.