We appreciate your patience, sacrifice but we disagree with your strike — NUGS to striking UTAG, SSAG-UoG 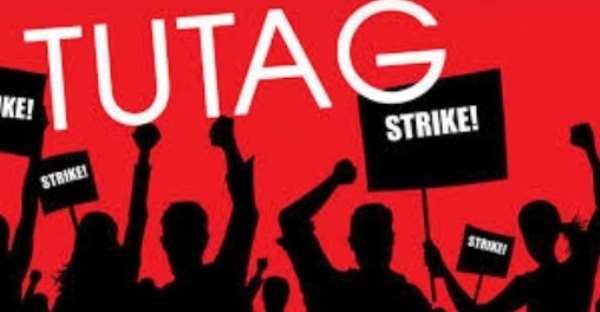 The National Union of Ghana Students (NUGS) says in as much as they appreciate the patience and sacrifice of members of the University Teachers Association of Ghana and Senior Staff Association-Universities of Ghana, laying down their tools at this era is bad timing.

In a statement, the student leaders noted that it disagrees with the strike approach considering its effect on students, especially within the abnormal times we find ourselves in and the earlier obstruction of academic work by the global shut down’.

They therefore called on UTAG and SSA-UoG to, as an act of good faith towards students and government, avoid an entrenched position in all dialogues to address their concerns.

The statement signed by President, Yiadom Boakye Emmanuel, Secretary for Education Kyeremeh Oppong Daniel and General Secretary Julius Anthony also called on government to respect the rules of engagement agreed upon by parties and reach a compromise that will satisfy all parties as soon as possible.

NUGS appealed to lecturers to stay in the classroom for the sake of the future generation as they continue to negotiate with the appropriate quarters since Ghanaian students should not always be at the receiving end.

“We implore all students to remain calm as the Union engages all parties involved for an amicable resolution,” it added.

Members of the UTAG and SSA-UoG issued a release on July 28 and 30th respectively registering their displeasure towards government’s delay in honoring the full terms of their negotiations. They condemned what they called government’s failure to respect the rules of engagement agreed by both parties.

They therefore announced an indefinite suspension of their responsibilities starting from today Monday, August 2, 2021, a treat they have lived up to.