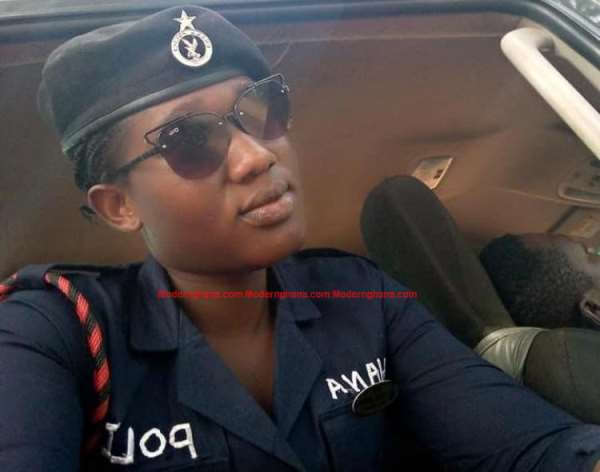 A police woman has allegedly been murdered by her jealous boyfriend at Abinga-Kura, a suburb of Damongo in the West Gonja Municipality after she was reportedly caught having an affair with another man.

The deceased identified as Constable Sandra Aseidu was stationed at the regional police headquarters of the savannah region.

Landlord of the deceased, Mr Mahama Zakaria told this reporter that a young man who is yet to be identified, traveled to Damongo from Obuasi in the Ashanti Region to visit the deceased [Constable Sandra Aseidu] only to find her with another man in her room.

Incensed by what he witnessed, the jealous boyfriend confronted the other man believed to be a soldier. They both traded blows.

The account of the landlord further revealed that the boyfriend of the deceased constable immediately left the scene after the brawl.

He said the police woman left for work the following morning after calm was restored.

According to the landlord, his instincts told him in the early stages of today Monday, August 2, 2021 to check on the police woman considering the seriousness of the matter.

True to his instincts, he opened the door and found the deceased Constable Sandra dead soaked in blood on her bed after suffering from multiple knife stabs.

As at the time of filing this report, a statement in part from the police headquarters in Accra regarding the murder of the late Constable issued by the public Director of affairs reads, " a police constable ( name with held ) has been found dead at her residence at Damongo in the Savannah Region on 2nd August, 2021.

"She was found in a pool of blood with wounds believed to be knife stabs. The body has since been deposited at West Gonja District Hospital, pending investigation. Her boyfriend is highly suspected and the police are on manhunt for him".

The police administration according to the release has also started processes to inform the family of the deceased and assures that it will update the public on the matter.