Both sides in Cameroon conflict must protect civilians, says HRW 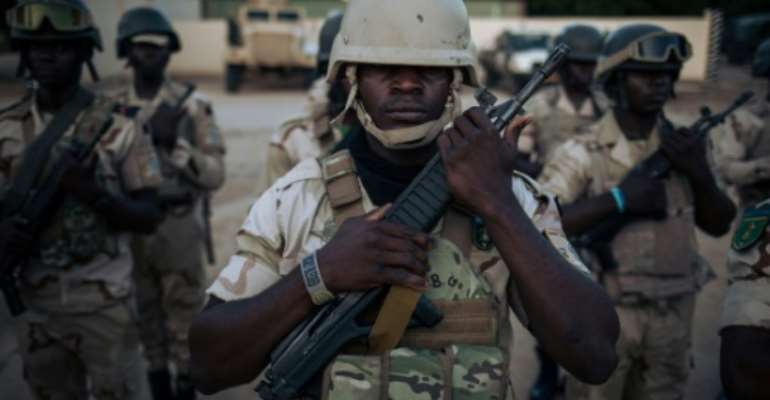 Abuses by both sides 'highlight the urgent need to protect communities at risk and to hold those responsible for abuses to account,' HRW said. By ALEXIS HUGUET (AFP/File)

Human Rights Watch on Monday urged authorities in Cameroon to protect civilians caught up in a conflict pitting the central African country's army against separatists in the west, denouncing atrocities committed by both sides.

More than 3,500 people have been killed and over 700,000 have fled their homes to escape the conflict that erupted in 2017 in Cameroon's English-speaking regions.

"Cameroonian security forces killed two civilians, raped a 53-year-old woman, destroyed and looted at least 33 homes, shops, as well as a traditional leader's palace in the Northwest region on June 8 and 9," the rights group said in a statement.

It said it had interviewed several victims, their relatives and witnesses, as well as local journalists and civil society activists.

The alleged rape victim said her ordeal began when soldiers asked her and her husband where the separatist fighters were.

"We said we didn't know," she said, according to HRW. "They said my husband had a gun. We said we had no gun. They said they would kill us, and then one of them raped me."

"But yet again, we learn that they have responded to the threat from separatist groups with attacks on civilians and serious human rights violations of their own."

Map of Cameroon locating English-speaking regions and their capitals. By Valentina BRESCHI (AFP)

The defence ministry declined to comment on the report when reached by AFP.

The statement also detailed killings -- including of a 12-year-old boy -- and kidnappings carried out by separatist fighters.

The abuses by both sides in the conflict "highlight the urgent need to protect communities at risk and to hold those responsible for abuses to account", the statement said.

Other humanitarian groups including Amnesty International and Doctors Without Borders (MSF) have also raised the alarm recently about the risks faced by civilians.

Members of the English-speaking minority in the western provinces have long complained of being marginalised by the French-speaking majority and 88-year-old President Paul Biya, in power for 38 years.

Their demonstrations escalated into conflict in 2017.

Your MMDCE list plagued by inequalities entrenched in the du...
31 minutes ago

Chereponi: 12 arrested after vandalising properties over nom...
56 minutes ago