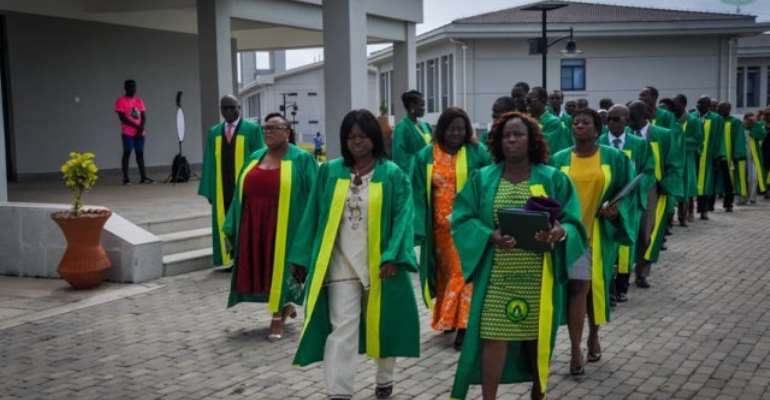 The University of Health and Allied Sciences (UHAS), has suspended social activities on its campus over an upsurge of covid-19 delta variant cases.

The decision followed a meeting with the sub-committee of the Volta Regional Public Health Emergency Management Team on the increase in the number of COVID-19 and its derivative cases in the University.

Director of Public Affairs of the University, Maria B. Gwira, in a signed statement disclosed that social activities suspended, include the planned “Miss UHAS pageant by the UHAS SRC, hall and other club or society week celebrations.”

She said other activities including religious Christian, Islamic or any other meetings and services might be organized with strict observation of the protocols and shall not last more than one hour.

“Dancing, holding hands and loud prayers should be avoided. Other weekly religious activities should be suspended.”

Ms Gwira noted that the University Management and the COVID-19 Response Team had put in place various measures to contain the situation.

She said it included; the conversion of two University facilities as isolation centres to augment the Regional Treatment Centre and the Teaching Hospital isolation facilities with trained health personnel being allocated to the facilities.

The Director of Public Affairs noted that the Regional and Municipal Emergency Public Health team had been brought on board to support contact tracing and management of affected individuals.

“The efforts include; identification and activation of additional facilities for isolation and management of positive cases.”

Ms Gwira noted that although most of the affected students and staff had cooperated with the response team, there were others who had refused isolation and had denied their results because they were asymptomatic.

She noted that that action was dangerous, as it predisposed others to contracting the infection.

“We therefore encouraged all to stay calm, cooperate and follow the protocols.”

The statement revealed that initial genomic sequencing performed by the UHAS COVID-19 Testing Centre showed the Delta (Indian) Variant was the predominant variant circulating, adding that “this variant is highly contagious.”

“A significant number of infected persons have shown symptoms such as cold, sore throat, headache, fever, loss of smell and taste, among others.”

She said some of the symptoms resembled what many would think was malaria.

Ms Gwira noted that other decisions included lecturers being encouraged to move their lessons online to reduce the level of interaction and infection.

She said persons with co-morbidities such as sickle cell, hypertension, diabetes and the aged; 55 years and above shall limit public interactions and strictly observe COVID-19 protocols to avoid contracting the infection.

“All staff and students, who may have any of the symptoms or come into contact with persons who test positive, are strongly encouraged to get tested at the UHAS COVID-19 Testing Centre.”

The Director also advised that “once you get a sample taken, it is recommended you isolate yourself until your result is out.

“Kindly note that the virus has an incubation period of 4 to 6 days during which tests may come out as negative. Hence, once contacted, you should follow all protocols and, where possible, get a repeat test after six days.”

Ms Gwira noted that all University facilities remained strictly “No Mask, No Entry” adding that security, lecturers and other personnel were encouraged to enforce the rule and all other protocols.

In a related development, Dr Senanu Djokpto, Deputy Director, in-charge of Public Health disclosed to the Ghana News Agency that active cases stood at 425 as of Thursday and expecting some 100 more as results of new positive cases have been received.

He said the Delta variant was fast spreading in some Senior High and Basic Schools in Ho and appealed to students to adhere to the health protocols due to the volatile nature of the Delta virus.

He disclosed that cumulatively the region recorded 3,150 cases and 2,689 being recoveries.