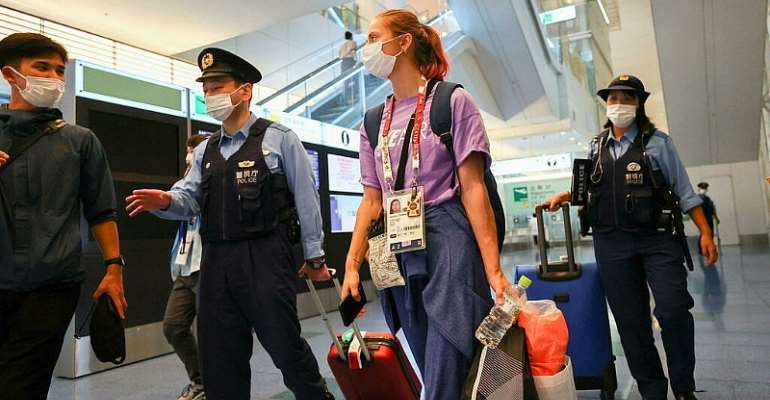 A Belarusian Olympic athlete who claimed her team was forcing her to return home spent the night under police protection and may be seeking asylum, Olympic officials have announced.

Twenty-four-year-old sprinter Kristina Timanovskaya missed her chance of competing in Tokyo when the 200 metres heats went ahead without her.

A  Japanese government spokesman said authorities understood Timanovskaya had "expressed a will to seek asylum", but offered no further details.

Timanovskaya spent the night in an airport hotel after seeking protection late Sunday from Tokyo 2020 officials. She said she did not want to board a plane taking her home, according to the International Olympic Committee.

"She assured us that she feels safe and secure. She spent the night at an airport hotel," he added.

Reports said the runner was seeking to apply for asylum, possibly in Europe. The IOC would be "talking again to her this morning, to understand... what she wants to pursue, and we will give her support in that decision", Adams said.

He also said officials from the UN refugee agency UNHCR were involved in the case.

Japanese police and the foreign and justice ministry in Tokyo declined to comment on the case. UNHCR's Tokyo office also had no immediate comment.

The government spokesman told reporters that Timanovskaya was speaking to the IOC, organisers and "other relevant organisations" about next steps.

"The government will continue closely cooperating with relevant organisations and will take appropriate measures," he said.Japan will handle the case "base d on the law", he added.

Timanovskaya alleged overnight that her team was attempting to send her home after she criticised Belarus's athletics federation for entering her into a relay race in Tokyo without giving her notice.

"It turns out our great bosses as always decided everything for us," she said in an Instagram story video that is no longer available.

In a later Instagram post she added that she wouldn't have "reacted so harshly if I had been told in advance, explained the whole situation and asked if I was able to run 400 metres".

"But they decided to do everything behind my back," she added.

And in a video the athlete appealed to the IOC to intervene in her case, warning: "I am under pressure and they are trying to take me out of the country without my consent."

Adams said the IOC had demanded a full written account of the incident from Belarus's Olympic committee, adding that the IOC has taken a series of actions against the committee in recent months.

Belarusian President Alexander Lukashenko's disputed re-election to a sixth term last August led to the most serious political crisis in the country's modern history, with protesters taking to the streets and authorities cracking down on the opposition.

In December, the IOC banned Lukashenko and his eldest son Viktor from Olympic events over the Belarus Olympic committee's targeting of athletes for their political views.