Rising levels of unemployment in Ghana : A ticking time bomb 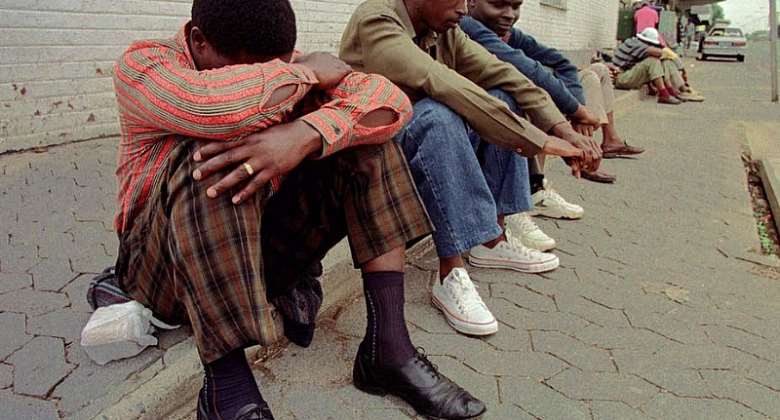 Unemployment is a term used to describe the situation where people who are employable or available for work and are actively seeking for employment are unable to find one. Ghana's rate of unemployment continues to experience a massive inrush year after year and the backlog of unemployed people in the country, most of who are not only youthful but also educated is worrying and unfortunate especially against the backdrop of all the numerous natural resources available in the country.

The country's current unemployment situation can be likened to a patient in the intensive care unit of a hospital who is on life support and needs urgent and critical medical attention, a situation which if not checked could be disastrous in the not too distant future until urgent steps are taken to reverse the trend.

Sadly the situation continues to exacerbate year after year with no hope in sight. As is expected tertiary institutions in the country both public and private churn out many graduates onto the job market each year but after their mandatory national service most of these graduates go and stay at home as there are but only a few job opportunities available in the system.

It is a common place in Ghana now to find people who have never been employed after school. Some have stayed unemployed continuously for five years or more. Most of these young graduates after their national service just stay idle at home and loiter about with virtually nothing profitable to do. They go job hunting from one office to another with their CVs and certificates in hand but to no avail. Most of these job seekers have invariably become so disillusioned and have lost so much faith in the system. Some however are hopeful that things can one day turn round for their good and that is my fervent hope too.

It is pathetic to note that some of the teeming unemployed youth typify the idiom 'Devil finds work for idle hands.' Today crime rate is on the ascendency with most of the culprits being unemployed youth. Social vices and illegalities are now the order of the day. Not a single day passes without crimes like armed robbery, fraud (cyber, mobile money etc) murder for ritual money popularly referred to as sakawa etc making the headlines of the major news outlets in the country. Teenage pregnancy and prostitution can now be comfortably declared as a 'pandemic' due largely to the high unemployment rate in the system.

A sad offshoot of the idleness borne out of unemployment among the youth is drug/substance abuse. I am utterly dismayed and scandalized by the kind of substances abused by the youth nowadays. Tramadol, codeine, weed, cocaine and even adhesives like super glue and wood polish are all being abused with reckless abandon

The government spends huge sums of money every year to fight illegalities like illegal mining, illegal fishing, illegal lumbering among others. But the main culprits of these illegalities are mostly the unemployed youth who are fighting for survival. I am of the considered opinion that when we are able to provide decent employment for our compatriots we can invariably reduce crime and other illegalities to the barest minimum.

Due to the sad situation of massive unemployment in the system many of our future leaders are wasting away and wasting their lives. We need to do something urgent to curb the situation and inject some sanity into the system. We cannot continue to sit aloof whilst the devil uses the minds of our young people as his workshop.

In this regard the buck stops with the government to provide the kind of leadership that will stimulate growth in the economy and throw out the much needed jobs. In recent times government has been phenomenal in creating jobs through interventions like the Nation Builders Corps (NaBCo), One District, One Factory (1D1F), Planting for Food and Jobs (PFJ), Planting for Export and Rural Development (PERD), National Entrepreneurial and Innovations Program (NEIP) among others as well as massive recruitments in all Ministries, Departments and Agencies (MDAs). But all of these efforts appear to be a drop in the ocean due to the huge backlog of unemployed people in the system. However I do concede that for some of these interventions and efforts on the part of the government the situation could have been worse.

The country is sitting on a time bomb, one that can detonate into civil strife and unrest if not decisively addressed within the short to medium term.

Like I mentioned earlier, the number of graduates churned out of our tertiary schools alone every year is overwhelming. Then there are those who did not go to school but learnt a trade, artisans etc. Just like a deluge we are fast sinking under unemployment and it cannot continue to be business as usual. We need to inject some dynamism into our job creation efforts.

We need to rescue this country from the shackles of unemployment as quickly as possible to prevent an impending implosion that would be catastrophic for all of us with inconsequential ramifications.

We all have a critical role to play in this regard. Those of us who have the capacity to provide employment for at least a person or two should not take it for granted. That could be the lifeline to somebody's deadline.

It is also sad to note that some of our unemployed graduates despise humble beginnings. Because they are educated, they assume they should start with huge salaries/ wages. Some of them are so dishonest to the extent that a lot of private enterprises and initiatives have collapsed and some are bleeding due to their dishonesty. Let us encourage our unemployed graduates to understand that Rome was not built in a day and that hard work and honesty pay. It is only a matter of time.

Our country should not be a country of "survival of the fittest" rather a country full of opportunities and safety nets for citizens which would be the envy of many countries in the comity of nations.

Do not let us dim the light, the black star in the 21st century must shine and sparkle even more brighter as the land full of limitless opportunities.

May God bless our homeland Ghana and make her great and strong.

The writer is a freelancer from Aboso, via Tarkwa in the western region