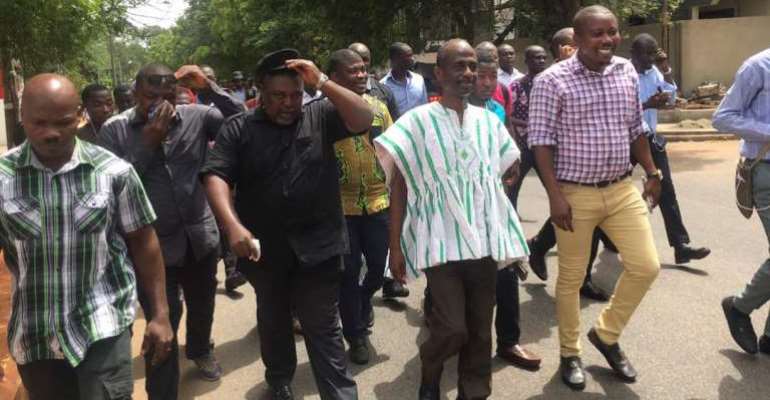 In February of this year, when the so-called Functional Executive Committee (FEC) of the country’s main opposition National Democratic Congress (NDC) announced that it had decided to summarily suspend Mr. Samuel Koku S. Anyidoho from the party, pending further considerations, I admonished the sometime foremost propagandist of the Jerry John Rawlings-founded political machine to make serious preparations towards voluntarily renouncing his party membership and founding or establishing his own party and confidently and steadily moving on from there.

The proverbial handwriting was strikingly and inescapably on the wall, of course, in view of the fact that the Johnson Asiedu-Nketia-chaperoned Functional Executive Committee had already suspended and then summarily expelled the well-respected Mr. Bernard Allotey-Jacobs, the honorably retired Central Regional Chairman of the National Democratic Congress, for some of the same charges that would eventually be brought against Mr. Samuel Anyidoho, the Kofi Awoonor nephew, which was that both men had been flagrantly engaged in “anti-party conduct” (See “Koku Anyidoho Sacked from NDC Over Anti-Party Behavior” Modernghana.com 7/27/21).

One does not have to stretch one’s imagination very far to arrive at an appreciation of precisely what constitutes anti-party conduct among the ranks of the leadership of the National Democratic Congress. All that the culprit or target for expulsion needs to do is to put on his/her critical-thinking cap by objectively or dispassionately commending the Number One Enemy of the party, namely, President Addo Dankwa Akufo-Addo, for the very progressive policy initiatives that the legendary “Little Man from Kyebi” and his government officials have put in place to get an effectively stalled national ship of state moving and working again, quite the very opposite of what had prevailed under the watch of former President John “European Airbus Payola” Dramani Mahama, the man that the late Founding-Father of the National Democratic Congress had virulently and incessantly described as the most thoroughgoing corrupt Ghanaian leader since Independence.

In the case of the self-described Cape Coast Fisherman, Mr. Allotey-Jacobs’ major crime was having been quoted by the media to have said that the state-of-the-art Akufo-Addo-imported ambulances, some 300 of them, were so divinely neat and celestial that a patient in the throes of death being conveyed to the nearest clinic or hospital was apt to find a cure for her/his ailment long before the Akufo-Addo-imported ambulance on which s/he was being transported arrived at its destination. Earlier on, of course, Mr. Allotey-Jacobs had glowingly commended President Akufo-Addo for his Fee-Free Senior High School Policy Initiative, a civically inclusive cross-partisan policy that had enabled more than 200,000 talented youths who could otherwise not have had the prime opportunity to improve their chances for a brighter future to do so at absolutely no cost.

Still much earlier on, while on the electioneering campaign stumps, a then incumbent President Mahama had sneeringly pooh-poohed the Fee-Free SHS Policy Initiative as the veritable pipedream of a desperate politician. In sum, this whole decision to deliberately target the most objectively minded and influential leaders of the National Democratic Congress for summary expulsion, pretty much echoes what is presently happening in the Republican Party (RP) right here in the United States of America, where any GOP (or Grand Old Party) member who criticizes the recently democratically ousted President Donald John Trump for his rabidly and pathologically Neo-Nazo policies and patently seditious activities gets branded as a party turncoat and sidelined immediately and/or gets effectively proscribed as a persona-non-grata. I have also observed time and time again that this idiotic policy of targeting and expelling politically and ideologically progressive and formidable members and operatives of the National Democratic Congress is the most organic and swiftest means of ensuring the effective collapse of the party in absolutely no time at all.

In the case of Mr. Anyidoho, it was the latter’s overweening pride or sheer insufferable arrogance and unmistakable threat to the personality and position and influence of Mr. Asiedu-Nketia – aka General Mosquito – the General-Secretary and de facto National Chairman of the National Democratic Congress, that culminated in such comeuppance. The present infighting among the ranks of the very top leadership of the NDC is likely to get even worse before it gets better down the pike. But the real problem here, of course, is a hugely disappointing Akufo-Addo-led New Patriotic Party (NPP) that curiously appears to be strenuously and self-destructively fighting to keep the National Democratic Congress’ kleptocratic key operatives relevant and even stiffly competitive by unwisely and consistently and insistently repeating many of the most deleterious policies that got the NDC resoundingly booted out of Jubilee House, such as the Agyapa Mineral Investment Deal, which was originally, we learn, authored by the John Evans Atta-Mills-led regime of the National Democratic Congress, and then the John “Akonfem-Kanazoe” Dramani Mahama-led Presidential Spouses’ Emoluments Sinecure.