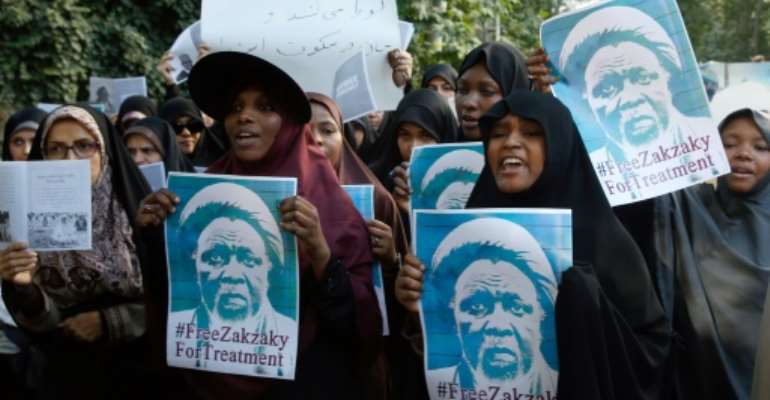 Ibrahim Zakzaky's followers have staged regular protests calling for his release. By - (afp/AFP/File)

Nigeria has filed fresh terrorism charges against a Shia Muslim cleric, a prosecution lawyer said Sunday, days after he was acquitted of murder following almost six years in detention.

A court in the northern city of Kaduna discharged Ibrahim Zakzaky and his wife on Wednesday because of a lack of evidence in a case involving the killing of a soldier in deadly clashes between their followers and troops in December 2015.

Zakzaky has repeatedly called for an Iranian-style Islamic revolution in Nigeria -- where the Muslim population is predominantly Sunni -- putting him at loggerheads with the secular authorities.

Dari Bayero, prosecution lawyer for Kaduna state government, said terrorism charges were filed against Zakzaky at another court two days before his release.

He said the charges involved "terrorism and treasonable offences" and attempts were made to serve the cleric with court papers while he was in detention but he refused to accept them.

Bayero said the court was now on holiday and the prosecution would have to wait until September before trying again.

Zakzaky, his wife Zeenah Ibrahim and 200 followers of their Islamic Movement of Nigeria (IMN) were arrested in the 2015 crackdown in the northern city of Zaria in which hundreds were killed.

A court in 2016 ordered the couple to be released, but the authorities ignored the ruling.

Most of the 200 sect members have since been released.

In the past six years, IMN supporters have staged regular protests in the capital Abuja calling for the release of their leader.