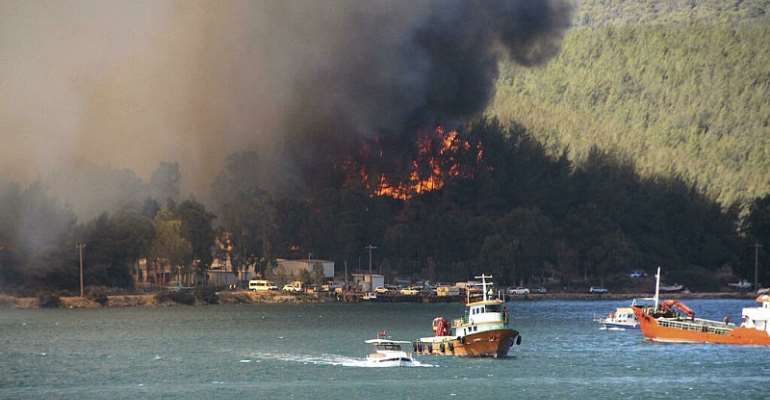 Authorities evacuated dozens of villages in tourist areas in southern Turkey on Sunday as wildfires that have claimed six lives raged for the fifth day, while Greece, Italy and Spain were also hit by blazes.

Fanned by soaring temperatures, strong winds and climate change -- which experts say increases both the frequency and intensity of such blazes -- this year's fire season has been significantly more destructive than the previous average, EU data shows.

Evacuations were underway in Bodrum and Antalya local media reported.

International aid
President Recep Tayyip Erdogan visited the town of Manavgat on Saturday, where several deaths and injuries were reported.

After being criticised for his handling of the disaster Erdogan said the number of planes fighting the fires had been increased from six to 13, including planes from Ukraine, Russia, Azerbaijan and Iran.

Thousands of Turkish personnel as well as dozens of helicopters and drones were assisting the firefighting efforts, he stated.

Greece
Firefighters were also battling fires in Greece, after a major blaze broke out early Saturday near Patras in the west.

Five villages have been evacuated and eight people hospitalised with burns and respiratory problems in the region, which remains on alert.

Around 20 homes have been burnt down, according to a provisional figure from the fire brigade.

The mayor of nearby village Aigialeias, Dimitris Kalogeropoulos, called it "an immense catastrophe".

Around 30 houses, barns and stables were consumed by flames in the villages of Ziria, Kamares, Achaias and Labiri.

The seaside resort of Loggos was also evacuated, with nearly 100 residents and tourists sent to the nearby city of Aigio.

Some 150 people trapped in two seaside areas in the city of Catania were evacuated late Friday by sea, where they were picked up by rubber dinghies and transferred to Coast Guard boats.

More than 800 flare-ups were recorded this weekend, mainly in the south, Italy's fire brigade said.

Spain
In Spain, dozens of firefighters backed by water-dropping aircraft were battling a wildfire that broke out Saturday afternoon near the San Juan reservoir, about 70 kilometres east of Madrid.

Firefighters said Sunday they had managed to stabilise the blaze overnight but local authorities urged people to stay away from the reservoir, a popular bathing spot for residents of the Spanish capital.

Finland
Finland continues to battle its worst forest fire in half a century with some 300 hectares ravaged in five days in a northwestern valley during an exceptionally hot summer.

The fire began on Monday about 25 kilometres south of the small port town of Kalajoki in the Gulf of Bothnia.

There have been no casualties so far as the area, about 500 kilometres north of the capital Helsinki, is sparsely populated.

"It's still burning, but it hasn't got bigger, it's limited to 300 hectares (nearly 750 acres)," Jarmo Haapanen, in charge of firefighting operations near Kalajoki, told AFP.

He said it would take a "minimum of one week, perhaps two or three weeks" for it to be put out completely.

Some 250 people, including army soldiers and four helicopters have been mobilised to douse the flames.